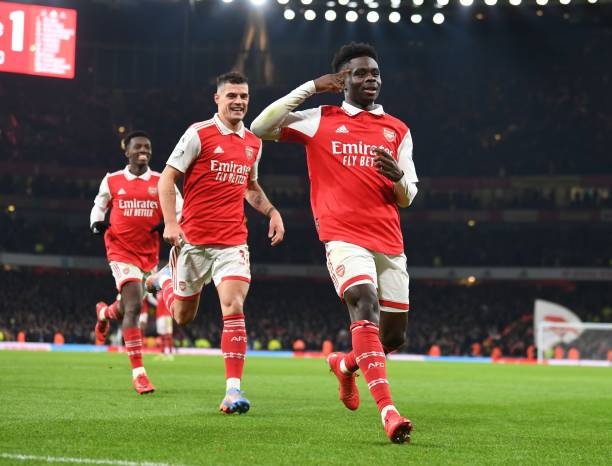 Bukayo Saka sent a message to Arsenal fans after their 3-2 win over Manchester United at the Emirates Stadium yesterday. The 21-year-old forward scored the Gunners’ second goal, curling an unstoppable shot past David de Gea in the 53rd minute of play. After an incredible victory over United, Saka posted a message on his Twitter account indicating that they just never stopped believing even though it looked like they wouldn’t get all the three points.

The match certainly provided its own drama as Manchester United opened the scoring through Marcus Rashford’s stunning strike. However, Eddie Nketiah responded immediately a few minutes later with a header from Granit Xhaka’s pass; making it 1-1 at halftime. This lead to an even more intense second half in which further goals from Saka and hero Nketiah secured one of Arsenal’s most famous victories of recent times.

Arsenal winger Bukayo Saka has taken to social media to send a message to the supporters of the North London club after their impressive win over Manchester United:

“What a WIN! We never stopped believing. Thank your for the support Gunners, the energy was unreal. We keep going!” wrote Bukayo Saka on Twitter.