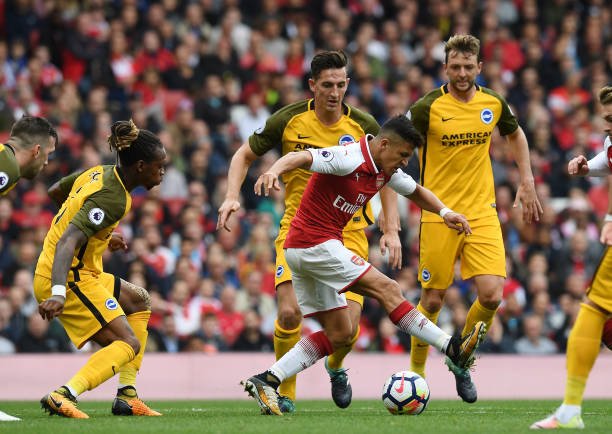 The gunners secured three points against Brighton & Hove Albion yesterday thanks to two goals from Alex Iwobi and Nacho Monreal who scored the only goals in the match. This win means that Arsenal have now won four of their first seven English Premier League matches and they will be hoping that they have improved from the embarrassing defeat to Liverpool at the Anfield stadium. Arsene Wenger was very happy about the performance of his team as the gunners moved up a little into the 5th position and he also had this to say about the match.

“I would say that we kept a clean sheet, we got the points and offensively we were certainly not ruthless enough. Our focus and the pace in the game was a bit in and out, we had good moments and as well moments where we lost a bit our concentration in balls that we usually don’t lose. ” said the Arsenal manager. (Info – arsenal.com)

The Arsenal supporters have been getting disappointed in the recent weeks but will be hoping that the last three matches show that their team is back at it’s best and ready to make a challenge for the title.

There were many talking points after the match and some were about why some regular players such as Laurent Koscielny and Mesut Ozil did not get selected in the squad to face Brighton & Hove Albion but the manager gave an update on that issue and says that the duo are injured;

The gunners have played three games without their first choice player maker Mesut Ozil and have played impressively without the German hence leading to most gooners believing that the 27 year old slows down the team when it comes to attack and are urging Arsene Wenger to be benching the German international more often so that he tries to fight for his place in the starting eleven like other players.

The gunners won yesterday’s match as a team but there were some outstanding individual performances. Alexis Sanchez was very influential in the match and even assisted the goal using a special skill that Alex Iwobi scored so most gooners believe that the Chilean is over the summer’s transfer window saga where the gunners reportedly blocked his move to Manchester City and is ready to move on and be focussed to Arsenal. Arsene Wenger believes that Alexis Sanchez is slowly making a connection with new Arsenal boy Alexandre Lacazette as the pair showed that they are developing a great combination.

“I feel that they combine well together and overall it’s a promising combination.There are some goals in there and with the providers around I believe we can score more goals.” said the boss (Info – arsenal.com)

Arsene Wenger was also asked about what he thought about the fantastic assist Sanchez did for Alex Iwobi and he said that it was a beauty and is happy that his team did nit concede any goal.

Alex Iwobi scored his first English Premier League goal since January and he will be hoping to keep up the good form after the international break when the gunners take on Watford. The Nigerian international was very happy that he scored because he had been finding opportunities less at the club and knew this was the best chance for him to impress Arsene Wenger, here is what the player said after the match.

“I wouldn’t say it was comfortable but we made it as easy as we could for ourselves. Brighton are a very good team and they made it difficult for us, but it’s a great result to win the game and come out with a clean sheet.” said the winger. (info – arsenal.com)

Arsenal supporters will be hoping that the club keeps up the good form at home as the gunners have won nine successful English Premier League matches since March of this year. The gooners were also happy that their defender Nacho Monreal scored his first Arsenal goal at the Emirates stadium and were very joyful to see how the Spaniard celebrated the goal passionately. There were many stats on the gunners yesterday’s match as it was Arsene Wenger‘s 21 year anniversary at the club.