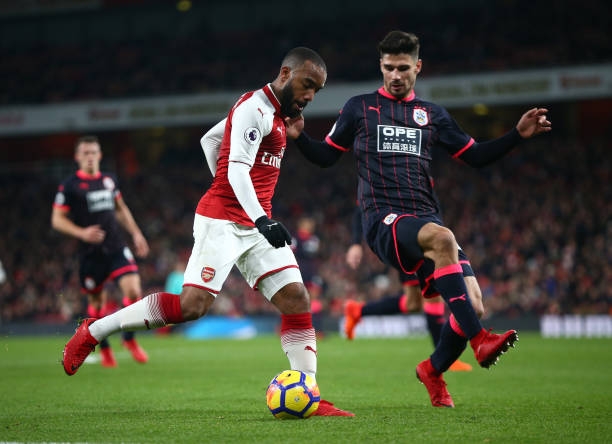 The gunners defeated Huddersfield Town yesterday showing a remarkable performance against the Epl side winning the match 5-0.

The gunners welcomed Huddersfield Town yesterday at the Emirates stadium and Arsenal showed a great display scoring 5 goals, 2 from Olivier Giroud and Mesut Ozil, Alexis Sanchez all scoring one goal each.

The gunners played the match high spirited after getting a late win against Burnley on Sunday.

WATCH THE HIGHLIGHTS BELOW:

Most supporters believe that this might be the best performance they have showed this season because everything was flowing impressively, team play, defense and all aspects of the match were well planned against the newly promoted Championship side Huddersfield Town.

There are some talking points that were observed in last night’s match.

1. Arsenal is usually very stable behind in defense when Shkodran Mustafi starts matches.

2. Alexandre Lacazette is a very good and top striker that just needs time to settle at Arsenal.

3. The gunners usually win matches that they usually score first.

4. Oliver Giroud is still an important player at Arsenal even though he usually starts on bench.

5. Arsenal are favourites to win in their fixture against Manchester United after great display against Burnley and Huddersfield Town.

The gunners will now be hoping that they get a win against Manchester United in order to make it three wins in three matches, something they haven’t done this season in the English Premier League.