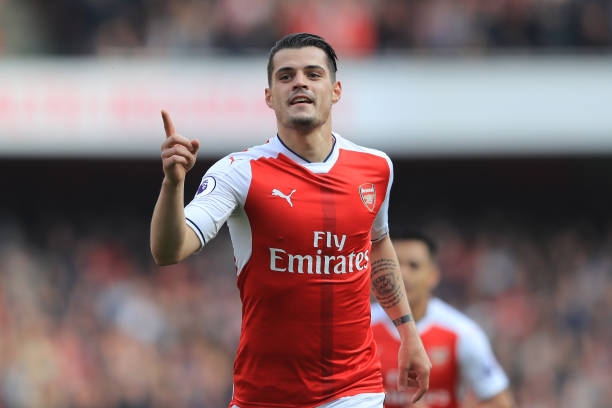 The gunners signed Granit Xhaka in the 2016 summer transfer window and the Swiss international has started getting used to the playing style of Arsenal.

The gunners have been criticising the player for his past performances in the few seasons (2) he has been at the club because of poor marking and recklessly tackling but it seems Granit Xhaka has finally started winning hearts of the supporters.

Granit Xhaka has revealed how he became a footballer and says that this is the field of profession he took but says that this decision came from the situation of his father in Yugoslavian prison which made him to stay bold and strong hence becoming a footballer.

“I think the mental strength comes from home.’

‘I ask my father about it a lot. You might not want to do it initially because you hear things, but I started asking when I was about 18 and was able to realise what happened myself.’ the midfielder is quoted by Daily Star.

‘I have asked him often but I think the full true story about how things really were is one he may not ever tell me.’

‘My dad played football too, in the former Yugoslavia.’

‘My brother was always going to go in the direction of football.”

The player laments that his decision to join football has been one of the main things that he will always remember as good choices. The player was signed from Basel in 2016 and he has showed that he is a fantastic player because he has been maintaining balance in the Arsenal midfield this season because he is Arsene Wenger’s first choice defensive midfielder.

The midfielder has so far scored two goals in his career at the Emirates stadium and he has become a fan favorite these days due to his remarkable performances in the last few weeks.

Petr Cech Gives Out His Say On This Season’s Campaign

Wenger Reveals How He Made Sanchez Look Dangerous In 2nd half