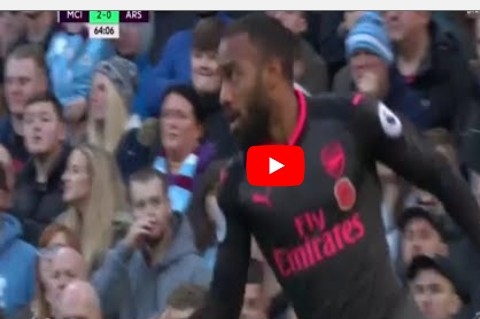 Arsenal got dismantled by Manchester City today but record signing Alexandre Lacazette helped gunners not to make it a total embarrassment by pulling one goal back.

Arsene Wenger made the biggest surprise ever today when he suddenly changed formation and left Alexandre Lacazette out of the lineup to face Manchester City today. Alexandre Lacazette was then brought in the 2nd half and scored a goal right after getting in.

CHECK VIDEO OF GOAL BELOW

Most gooners are disappointed with Arsene Wenger for not starting the French striker in today’s match because the record signing had started showing that he can make a great partnership with Mesut Ozil and Alexis Sanchez.

It seems the manager is still un sure whether he should always trust Alexandre Lacazette in big matches because the French international was benched when the gunners played against Liverpool.