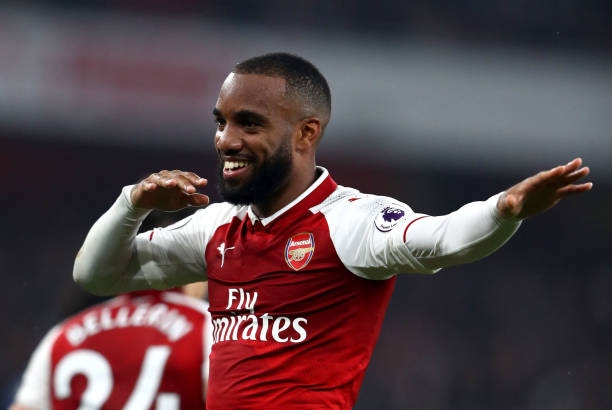 The gunners signed Alexandre Lacazette from Lyon in the summer transfer window in July after signing him on an Arsenal record fee which is believed to be above £50 million.

The striker has been at the Emirates stadium for about five months now and it seems the attacker has already bunged in 8 goals already this season even though he has not been able to put Arsenal in the top four.

The French striker has today given some reasons why he joined the North Londoners and he surprisingly said that it was not to win the English Premier League but if they do, says it would be fantastic;

“It would be really complicated to win it at this point.We would really need a miracle. City would need to lose a lot of their games and we know their record.’ the striker is quoted by MIRROR SPORT.

‘The goal in coming here was always to qualify for the Champions League and if we could get the title, fantastic.”

The gunners will some how disappointed with this statement because they praised him so much after it was confirmed that he was gonna be playing Emirates stadium hoping that he could be the one to finally lead Arsenal to their first English Premier League trophy since 2004 where they finished their season un beaten.

Alexandre Lacazette says that the main goal why he joined the gunners was to help them qualify for next season’s UEFA Champions League in his first season at the club but the French striker will need to work harder if he does want to achieve this goal because the gunners are on the 6th position now and have only made it to the top four for the first time this season which wasn’t the case the previous season’s.

There are some worries that the gunners could have made the wrong choice in signing Alexandre Lacazette because he has only scored 8 goals while they expected much from the player and it isn’t known whether Arsene Wenger will start the former Lyon star today when they take on West Ham United because Olivier Giroud scored a last minute goal for the gunners last weekend when they were hosted by Southampton at the St Mary’s stadium.