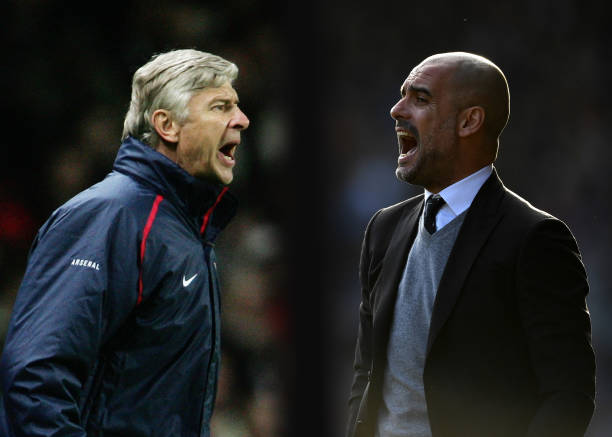 It’s speculative at best but if Arsene Wenger steps down as Arsenal boss , would it be feasible that current Manchester City boss could be tempted into replacing him ?

Pep Guardiola once wanted to join the gunners and had a meeting with Wenger about doing so as a player. It’s well documented that it came to nothing but Guardiola still admires the club , it’s current manager , the footballing philosophy and its history and this combination of factors plus the challenge of bringing the good times back to the Emirates , may persuade Guardiola to consider his options.

It’s a perfect fit when alls said and done for a whole host of reasons . Guardiola is a fan of fast moving , attacking football as he has shown with an imperious City this season and I that respect alone , he provides everything that Arsenal could possibly want.
Knowledgable and certainly articulate , which ticks another box and at this moment in time he is probably considered by many to be the best coach in the World.

His CV boasts some of the worlds best sides and Arsenal would make a fine addition to his collection.
In times of trouble , anything is possible and money talks , so if Arsenal were considering an approach the release Clause would no doubt be substantial.

He would be leaving a side that he has moulded into potentially one of the best sides this country has seen and one that could be on a prolonged run of success.

That’s the only negative in this story , could he give up what he has built at City , without feeling that the job is only half done.
If City go on to scoop up all the remaining silverware this term and do exactly the same the following season then it may lend itself to a change of mindset in Guardiola. Then , if Wenger were to eventually leave in 2019 , the boundaries would certainly start to narrow and the chances of his appointment could increase.

It will probably come to nothing , it’s probably a fanciful notion but it is an exciting one and one that given what I’ve just outlined could be possible.

Who would fans want ? They’re has been mention of club Legend Henry and I’m sure the faithful supporters would welcome him back with open arms but he has no track record and that’s true of another former Arsenal favourite, Mikel Arteta,, who is with City under Pep Guardiola.

Although Arteta is in the mix with City , he hasn’t got the reins and that may count against him. Bergkamp is another name doing the rounds but he is at Ajax and is so far unproven.

So if not Pep , then who ? Well , whoever it is will have to either , out of contract or more likely have to break their existing one with their club to take up position.

There isn’t an endless supply of quality managers around , so whatever name you choose personally , will come with a hefty price tag.

It’s all conjecture but it could be something that Guardiola has had the odd secret dream about. It’s all about timing and that’s going to be difficult to predict with Wenger still holding on to power , like a drowning man on a piece of driftwood.

Arsenal Have Lost Their Way, Kroenke Needs To Go