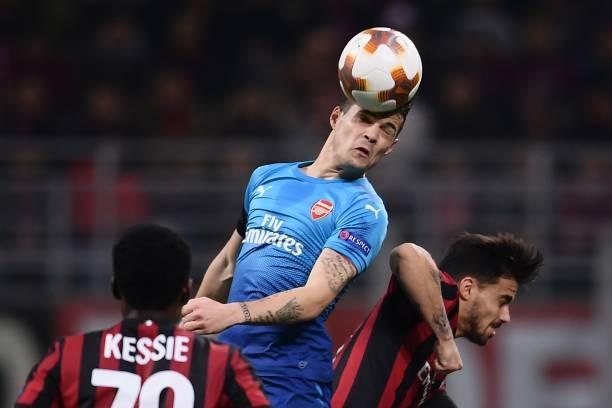 The gunners played against AC Milan last night at the San Siro Stadium and they defeated the Italian side 2-0 and Granit Xhaka was so happy that they were able to get a win away from home.

Xhaka was among the players that travelled to Milan to play their first leg match of the Europa League round of 16 and the squad was indeed very fierce in the match despite playing away from home.

The Swiss international was happy about the win and he had this to say after showing one of his best performances he has had as a gunner;

“At the start it was a little bit difficult for us, but after that we made it our game and we scored. I think 2-0 here in Milan is a good result for the first leg.’ Xhaka told arsenal.com.

‘Everyone knows that we lost the last four games and that was difficult for us. But as I said. before, we showed togetherness today.”

Xhaka has been facing a lot of criticism this season with many football pundits saying that the midfielder needs to be replaced in this up coming transfer window because he hasn’t lived up to the expectations of the Arsenal Team.

Wenger Makes His Say On The Win Against AC Milan