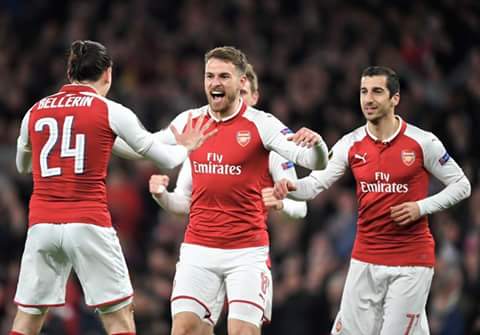 The gunners welcomed their Europa League opponents from Russia CSKA Moscow today at the Emirates and the Arsenal team proved to be much mightier than them as they won 4-1 after the home team displayed an outstanding performance.

The gunners came into this match with immerse confidence after winning their last four matches and they indeed out classed the visiting side who seemed displaced at the Emirates Stadium. Arsenal opened the scoring through Aaron Ramsey who scored in the 9th minute and had four on the score board in the first 45 minutes, Ramsey was also outstanding in today’s match as he scored a double.

Arsenal striker Alexandre Lacazette made his first start after two months on the sidelines due to a knee injury he sustained back. The striker was very impressive in today’s match as he scored a double for the gunners with one being a penalty goal kick which he converted into the back of the net.

– Arsenal have qualified for the Semi finals if they show same performance as today in Russia.

– CSKA Moscow will have to score 5-0 at their home stadium in order to eliminate gunners in 2nd leg.

– Aaron Ramsey and Alexandre Lacazette both scored a double today.

– The gunners had more possession in the match than the visiting side.