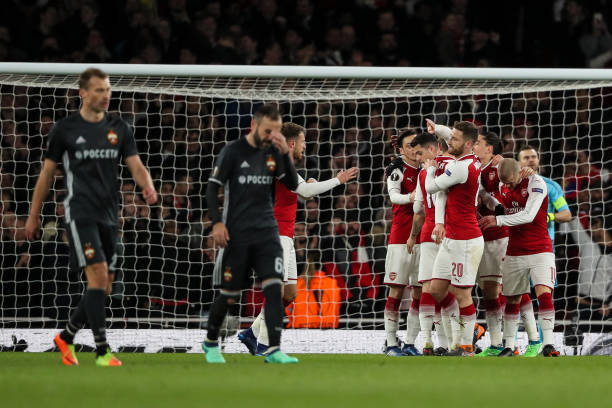 The gunners will be playing against CSKA Moscow tomorrow at the VEB Arena stadium as they battle for a spot in the Europa League semi finals.

Arsenal will come into this match with massive confidence after getting an over whelming win against the Russian club at the Emirates last week, the 4-1 lead of the gunners could be enough for them to qualify for the semi finals even if they draw at the VEB Arena stadium. So let’s take a look at the five talking points ahead of tomorrow’s match.

The gunners have a 4-1 win advantage which means that the Russian club will need to score four goals against Arsenal at their own stadium in order to eliminate the North Londoners which will be very hard.

2. ARSENE WENGER SHOULD REST SOME PLAYERS

Since it’s almost clear that the gunners have qualified for the semi’s so it will certainly be proper if the manager rested some players tomorrow in order to keep them ready for the up coming tough matches. Mkhitaryan has just been ruled out for the rest of the season so it would be disappointing to see an important player as Mesut Ozil getting an injury in this crucial time.

3. ARSENAL NEED TO WIN THE EUROPA LEAGUE BY ALL MEANS

So this contradicts with the 2nd talking point. The gunners will need not to take any chances when they face CSKA Moscow tomorrow because the gunners only have the Europa League as their only chance of winning silverware this season as well as qualifying for next season’s UEFA Champions League.

The gunners have left London and are already in Russia as they get ready for tomorrow’s match.