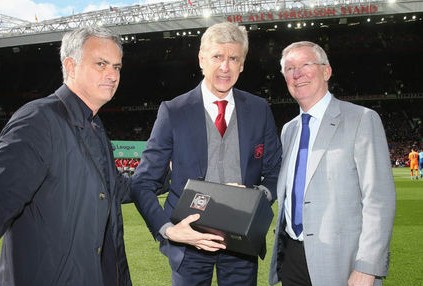 Arsene Wenger was humbly welcomed at the Old Trafford stadium and was then surprised after Sir Alex Ferguson un expectedly came and gave him a gift before the match between Arsenal and Manchester United begun.

The Frenchman came with his squad for a normal Premier League match but it was a special day for him because he was coming to the legendary Old Trafford stadium for the last time as an Arsenal manager and all the supporters including United fans rose up giving him a warm welcome as he came from the tunnel.

Arsene Wenger was surprised to see Sir Alex Ferguson alongside Jose Mourinho to come towards him presenting to him a gift which has made him happy despite the fact that he lost a match today against his arch rival and had this to say;

“Now I just want to go and have a glass of wine with Sir Alex because he always has good wine.” said Wenger.

Arsene Wenger and Sir Alex Ferguson were rivals for a decade but it seems that is all in the past now because they are friends now who even have a drink together.