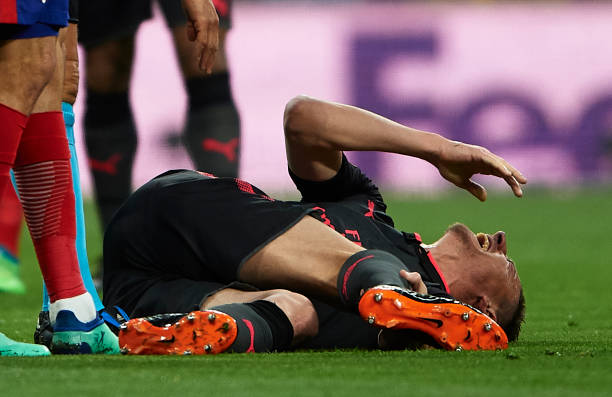 Arsenal defender Laurent Koscielny will be having a surgery after his injury has deteriorated, and the manager has today confirmed that the French midfielder will be out until December.

The Frenchman was stretched out of the Arsenal match against Atletico Madrid in Madrid in the early minutes of the game which they won’t on to lose at 1-0 to get kicked out of the UEFA Europa League, this long-term injury of Koscielny will be a big disappointment to the club and the supporters because he has been captain of the Arsenal squad in most matches this season.

Laurent Koscielny will be devastated with this injury because he will miss the World Cup 2018 which starts in June due to this long-term injury and the manager has said that the French defender won’t be seen until December;

“Koscielny is of course devasted because he needs surgery. That means he will be out for six months.” said Wenger.

“You will not see him at the beginning of December at best. ”

The Arsenal team will now dig deeper to the transfer market to get a new capable defender who will be a good replacement for the injured Frenchman who was the heart of the defense of the gunners.