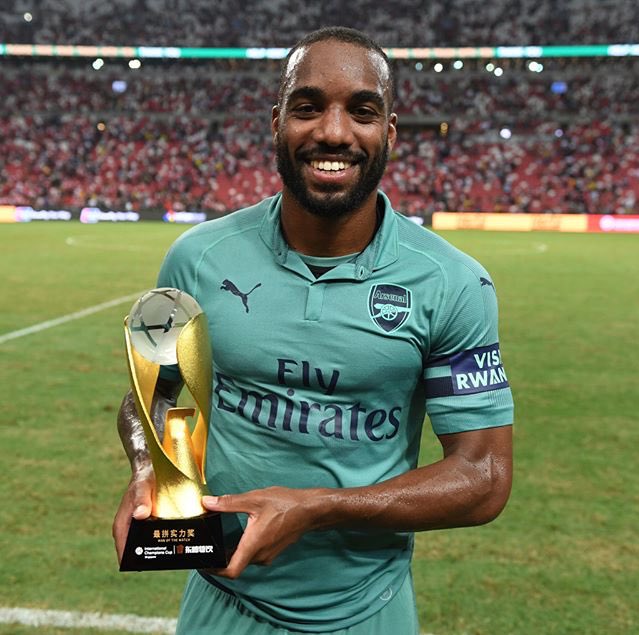 Arsenal signed Alexandre Lacazette last summer and the French international wasn’t that impressive for the gunners as expected even though he managed to score seventeen goals but gunners legend Robert Pires believes that the striker is still an important player for the North Londoners.

The arrival of Pierre-Emerick Aubameyang has put Lacazette in the shadows because the Gabon international is deemed as a better forward than the Frenchman even though they were all scoring many goals at their previous clubs.

Arsenal legend Robert Pires says that the gunners shouldn’t underestimate the importance of Alexandre Lacazette in their squad and says that he expects the player to score more than 15 goals in the 2018/19 season which starts in 13 days.

“Lacazette is a key player for Arsenal, I think he can have a big impact at Arsenal and will score 15-20 goals next season.” Robert Pires told Bwin.

“It’s important for Lacazette to get some stability so he has to talk to Unai Emery and work out where he is in the manager’s plans for the future.”

Robert Pires says that Lacazette is a good striker and that he must have been upset to have not been called up by France in its 23-man squad that travelled to Russia for the World Cup, and ended up winning it without the Arsenal star.

Arsenal fans are also looking forward to see how Lacazette will perform in the upcoming season but they are however urging their manager to make the French star make a partnership with Pierre-Emerick Aubameyang because they could be a phenomenal strike force in the 2018/19 season.

There were rumours that Alexandre Lacazette might be sold this summer when Unai Emery had been announced as the new manager of Arsenal but it seems those rumours were false because the player hasn’t shown any signs of leaving the Emirates Stadium this summer.