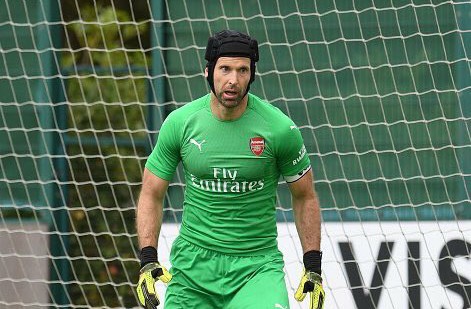 Arsenal completed the signing of Bernd Leno from Bayer Leverkusen this summer and the young goalkeeper comes to the Emirates Stadium to fight for the no.1 goalkeeper position with Petr Cech.

Petr Cech has been Arsenal’s first choice goalkeeper for the last three years but he will now face strong competition from Bernd Leno who just joined the gunners and the Czech Republican international is ready for the challenge as he was pictured looking very strong and muscular than usual.

The picture below was taken in Arsenal’s behind closed doors pre-season match against Crawley showed Petr Cech in an incredibly great shape unlike the past.

It seems the veteran goalkeeper has been on a good diet as he no longer seems to be slim like when he was last season and he will surely be stronger in the up coming season since Unai Emery over works the players in the training. Petr Cech will be hoping to impress Arsenal’s new manager Unai Emery so that he can choose him to be his first choice goalkeeper.

Petr Cech has already confirmed that he will fight for his position at Arsenal even though there are reports that his former club Chelsea are interested in the goalkeeper.