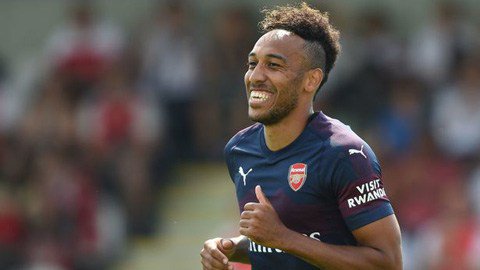 Arsenal striker Pierre-Emerick Aubameyang arrived at the Emirates Stadium in the January transfer window but he has since become one the fan favourites due to his actions and good togetherness which he brings at the club.

The Arsenal pre-season campaign is over and the gunners are preparing for their match against Manchester City this weekend and the Gabon international was among the players that impressed the new Arsenal manager in the pre-season matches so he will be hoping to get a start in the season opening match.

Aubameyang has sent a message to Arsenal supporters via his official Instagram account requesting them to come watch their season opening match against Manchester City and says that he hopes to see a full stadium on Sunday.

Pre season done ✅ let’s start with the @premierleague on Sunday!! I want to see a full stadium we need your support for this big season coming 😍💪🏽⚽️ #coyg #arsenal #aubameyang #smileyface #pea14 #A⚡️

“Pre season done, let’s start with the Premier League on Sunday!! I want to see a full stadium we need your support for this big season coming.”

Arsenal will be welcoming the Premier League defending Champions at the Emirates Stadium and this will be Unai Emery’s first match in the 2018/19 season and the manager will be hoping to get a win so that it could serve as a morale booster as he starts his reign at the North London club.

Aubameyang said that he hopes to be playing upfront with Alexandre Lacazette but it seems the manager won’t be using a formation which supports the both of them in the same lineup but maybe he will be using one of them on the wing.

Arsenal supporters will surely honour the request by Aubameyang because they will be hoping to see the new ‘Arsenal’ of Unai Emery in action against Pep Guardiola’s men who recently defeated Chelsea to win the FA Community Shield.