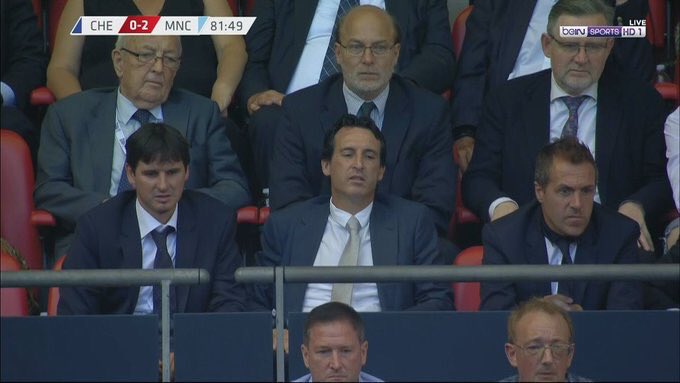 Arsenal manager Unai Emery was spotted watching the FA Community Shield match between Manchester City and Chelsea, the gunners boss watched the match as he prepares his squad to face those two teams soon.

The action by the new Arsenal manager has Arsenal supporters excited because this was something which they had never seen in the reign of Arsene Wenger but it seems Unai Emery prefers knowing more about his opponents before they actually meet.

He knows what he’s doing?

Wise coach…watching his next two opponents and taking note. I love this man

That gesture has a hidden meaning I believe… Gunners, read it in between the lines, that ain’t just a casual game I very much believe…

It seems the gunners believe that the manager made the right decision to watch the match since they will be facing Manchester City next week and later on Chelsea the following week so Unai Emery will be hoping to see the playing style of the two clubs since its his first time managing a club in the Premier League.

Manchester City defeated Chelsea 2-0 to win the FA Community Shield and Pep Guardiola’s men will now face the gunners with high confidence next week but Arsenal will also be hoping to show their impressive pre-season performance against Manchester City.