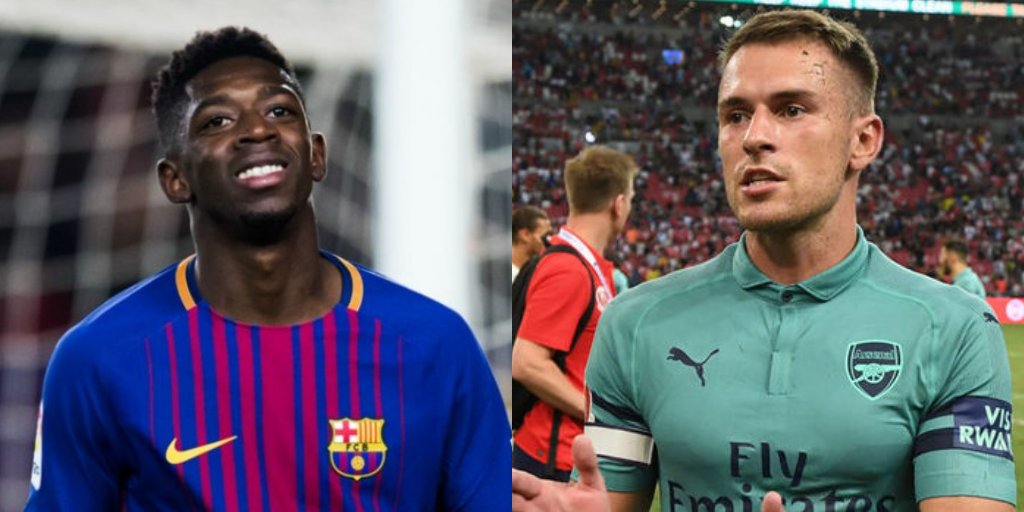 The gunners are linked with Barcelona star Ousmane Dembele and the Arsenal fans can’t seem to get over the speculation that the Frenchman might actually join them this summer before the transfer window closes and it seems there’s now a chance for them.

The Sun claims that the gunners might manage to sign Ousmane Dembele this summer if they are ready to let go of Aaron Ramsey because Barcelona might be interested in bringing the Welsh international to the Spanish LA liga since they even tried making a move for him in the past.

It is understood that Arsenal’s new manager Unai Emery wants to sign a  versatile winger this summer before he can call it a successful transfer window and Ousmane Dembele has been identified as the perfect choice but it will be a hectic for them to get him away from the Catalans. Unai Emery will however not be able to let go of Aaron Ramsey because he has already confirmed that he hopes to create his squad around the central midfielder.

Various reports also claimed that the gunners are waiting for Barcelona to make the player available to make a loan move away from Barcelona but it looks like it won’t be possible anymore because the midfielder would have opened up on that possibility.

Barcelona signed Ousmane Dembele for more than £130million and the North Londoners would still need to pay Barcelona more money if they were to accept the condition of Aaron Ramsey going to the Spanish Champions. Aaron Ramsey has one year remaining on his current contract at the Emirates Stadium and they haven’t reached an agreement with the club on the new deal even though the player still wants to be at the club.

Arsenal fans believe that Ousmane Dembele joining them would be a dream come true because they have for long wished for a world-class winger in their squad.