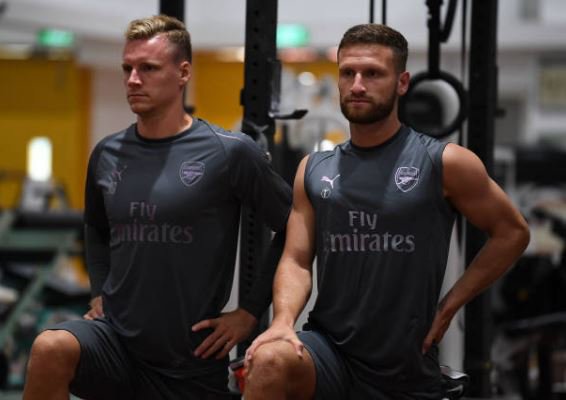 Arsenal signed Bernd Leno in this summer transfer window and the Germany international will have to wait for a long time before he gets given a debut in a competitive match for the North Londoners this season because Unai Emery has chosen Petr Cech as his first choice goalkeeper.

Arsenal defender Shkodran Mustafi knows the new goalkeeper because they played together in the past for the Germany under-15 team so he is happy that they are now reunited at the Emirates Stadium, the former Valencia star has said that he has known Bernd Leno for a very long time and has praised him for being a modern goalkeeper.

“He is a brilliant goalkeeper. He has everything a modern keeper needs, good feet, good hands and he has personality.” said Mustafi as reported by Metro UK.

Shkodran Mustafi also wanted to confirm to everyone that there isn’t any bitter rivalry between the goalkeepers or other players in other positions at Arsenal because they have healthy competition among themselves, and the Arsenal defender says that it is going to bring them forward.

Arsenal fans have urged Unai Emery to use Bernd Leno instead of Petr Cech for a long time now but the manager said that he is happy with the performance of the Czech Republican international in the two matches so far played, so Leno will have to wait until the Europa League starts before he can start playing regularly for the gunners in the European competition.

Shkodran Mustafi believes that Bernd Leno is a great goalkeeper as you can see in the statement he made above, as he calls him a full qualified modern goalkeeper since football has changed in the last five years.

Henrikh Mkhitaryan Reveals What Unai Emery Is Teaching Them