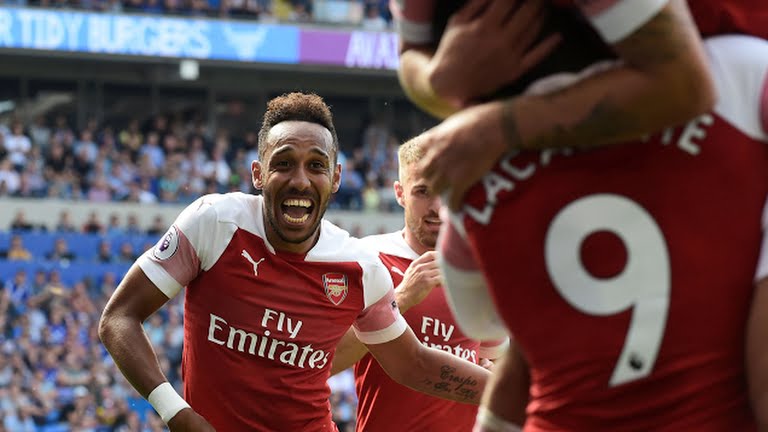 ( Aubameyang and Lacazette Vs Cardiff )

The gunners have got their second win of the season today after defeating Cardiff City 3-2 in a five goal thriller which sees the gunners get their first away win in the 2018/19 campaign. Shokdran Mustafi, Pierre-Emerick Aubameyang and Alexandre Lacazette were all on the score sheet of the gunners today.

Arsenal boss Unai Emery decided to finally listen to the advice of the Arsenal supporters and included both Alexandre Lacazette and Pierre-Emerick Aubameyang in the starting eleven for the first time this season, the two strikers scored today against the tricky Cardiff City squad which was really ready to put up a fight for the three points.

The match started off poorly for the gunners as they were unable to keep possession for two minutes and were always losing the ball in the midfield area, and Cardiff City took advantage of that as they pressed the gunners. Arsenal luckily got the first goal of the day thanks to a powerful header from Shokdran Mustafi, taking the gunners into the lead in the eleventh minute.

The gunners looked to be in control of the match after they got their first goal of the day but they started retreating back, because the Arsenal players thought that they had silenced Cardiff City, the home side surprised them when the referee was about to blow the whistle for halftime and got the equaliser through Camarasa hence the match ending 1-1 in the first half.

The gunners came into the second half while under pressure but started building their confidence as they looked for a goal, they looked sharp in attack but always made mistakes when they are near the penalty box of Cardiff City. The Arsenal fans finally saw the Laca-Auba combination in a well executed attacking move which saw Lacazette receive the ball in the final third and sends a quick pass to Aubameyang who sees that there is space for a shot, and fires one which goes right to the back of the net, making it 2-1 for the gunners.

Cardiff City didn’t trail for long as they got a controversial free kick after Alexandre Lacazette allegly fouled a Cardiff player yet the replays clearly show that they had no body contact. The Bluebirds were awarded a free kick and they sent the ball into the Arsenal box, finding the head of Ward who equalised for the home side.

The North Londoners were now on pressure as they looked for a winning goal which they eventually did in the 81st minute after Alexandre Lacazette got into the Cardiff City penalty box and scored through a rocket shot which got past Etheridge, with him not even making an effort to save it. So the match ended 2-3 in favour of Arsenal.

It was a very interesting match and it’s left to you to call it a lucky win for Unai Emery but the Spanish manager goes back home with three points.