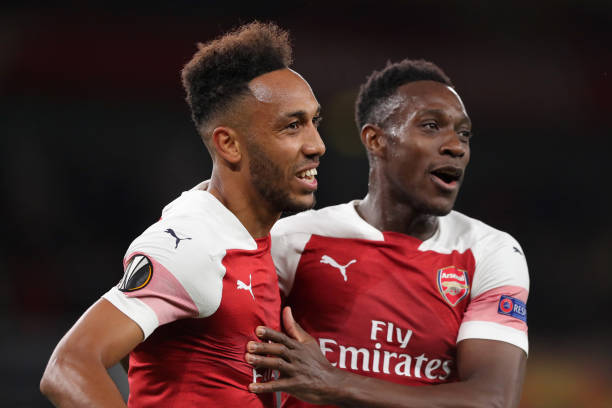 Danny Welbeck’s blistering form of late has called for his inclusion in the Gunner’s starting XI of late.Many would argue that he should be considered based on present form bordering on merit. So I will try to compare his place in the Arsenal team against Aubameyang’s inclusion in the team.

We’ve come to know recently that with the combination of Aubameyang and Lacazette in the team, Aubameyang will have to move to the left flank.A role he is not comfortable with as he is not a natural winger.Most times he gets dispossessed and looks out if sorts like a fish out of water despite the fact he scored 3 premiership goals this season.

Welbeck during Wenger’s last years was often deployed on the left flanks except on some occasions like the FA Cup or Carabao cup.

The question is who should be starting?

As a striker,based on stats according to Premierleague.com,Welbeck shouldn’t be starting in the Premier League as he has 42 goals in 202 apperarances and 19 assists while Aubameyang in his 19 appearances has 12 goals and 4 assists.

Aubameyang has a shot accuracy of 82% while Welbeck has a shot accuracy of 52% according to Sqawka.com. So it’s a no brainer on who should be starting a premiership game.But looking at the goal records in the Premier league this season, Aubameyang has scored 3 goals starting while Welbeck has just a goal this season coming from the bench but over all has the same goal tally with Aubameyang in all competitions, 4 goals followed by Lacazette with 3 goals in all competitions.

Based on the stats above ,we can deduce that Welbeck has a strong claim to the starting XI but does Unai Emery have much confidence in him?Unai had this to say about Danny Welbeck’s current form on Arsenal.com after the match against Brentford:

LONDON, ENGLAND – SEPTEMBER 26: Danny Welbeck of Arsenal reacts during the Carabao Cup Third Round match between Arsenal and Brentford at Emirates Stadium on September 26, 2018 in London, England. (Photo by Sebastian Frej/MB Media/Getty Images)

“But I am very happy with Danny Welbeck. He gives us quality and commitment every day. When he’s playing with a performance like today he’s helping the team and it gives us more [choices for the first 11] in the next matches.”

Welback in his elements offers much but his plague of injuries has hampered his progress as a player and I doubt Unai Emery will be picking him ahead of Aubameyang.At his age he should be starting regularly but with the bundle of talents in his postion at Arsenal it remains to be seen.

5 Reasons Arsenal Is Destined For The UCL