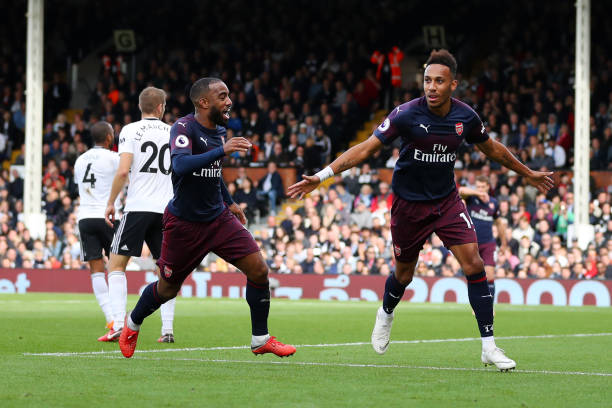 Alexandre Lacazette arrived at the Emirates Stadium in the 2017 summer transfer window and he has over the last few months become an important player at Arsenal and the fans have been happy with his current form.

Pierre-Emerick Aubameyang also arrived at Arsenal in the January transfer window and the Gabonian has surprised everyone with his personality because it was first rumoured that he fell out with the Borussia Dortmund management due to him having bad manners but nothing negative has been seen on him in his stay at the North London club.

Aubameyang and Lacazette are Arsenal’s main strikers and the fans thought that there will be much rivalry between the two because they literally play the same position but they have surprisingly showed brotherhood and always compliment each other on and off the pitch.

Lacazette and Aubameyang scored four goals for Arsenal on Sunday when the gunners took on Fulham and the Frenchman has spoken about his relationship with his Gabonian brother.

“It is good, he is like my brother. Every day we talk, we love to work together and on Sunday in front of the goal and we scored two goals, which is good.” Lacazette is quoted by the Mirror Sport.

Alexandre Lacazette also commented on the comparing of Pierre-Emerick Aubameyang with Arsenal legend Thierry Henry and he says that the former French star arrived at the North London club when he was much younger than Aubameyang but he however says that he hopes to see him score many goals this season so that they win something this season.

Arsenal boss Unai Emery had bought the idea of using both Alexandre Lacazette and Aubameyang at the same time a few weeks back but he however changed his mind yesterday and decided to bench the Gabonian who later came in as a substitute, and scored two goals and even made one assist.

Lacazette Not Called Up By France, Deschamps Reveals Why!

Alex Iwobi Speaks Out On Win Against Fulham