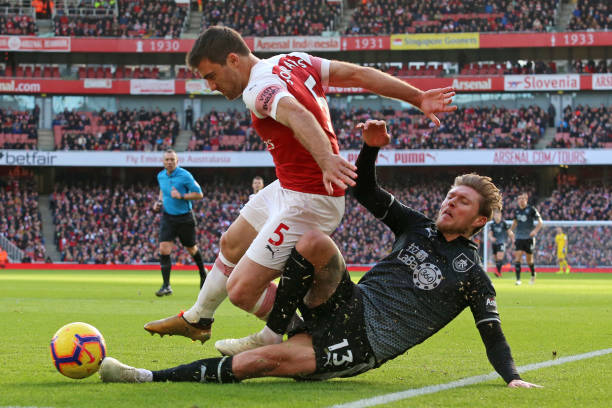 Arsenal bounded back with the 3 points as they brushed aside relegation threatened Burnley at home.

It was a scintillating match-up between both Premier League sides as Unai Emery’s men returned to winning ways. Sean Dyches men pulled a goal back in the game to ensure a frenetic end to the encounter.

However, it was Arsenal that had the final say as they scored in the 90th minute to seal a famous win. With Burnley’s defeat at the Emirates, we evaluate some features and match statistics as regards to Arsenals 3-1 win at the Emirate Stadium.

The match was a frenetic affair as both sides tested each other’s goal in the course of the 90 minutes. This saw the Gunners take 6 shots on target due to their superior attacking foray while Burnley managed just 3 shots on goal in the match as Unai Emery’s men claimed the win.

Arsenal was precise in front of goal and this meant they had only one shot off target in the entire duration.

Burnley shot wide off the Arsenal goal as their prolificacy let them down. This saw the visitors scored once in the match as they lost 3-1 away from home.

The host dominated the match as playmaker (Mesut) Ozil was at his element in setting up the first goal.

It’s  no surprise that Arsenal controlled the match in the middle of the park as midfield stalwart Lucas Torreira, Matteo Guendouzi and the aforementioned playmaker(Ozil) played their part to confound Burnley in the midfield.

Arsenal hit the back of the net straight away as talismanic forward Pierre-Emerick Aubameyang scored in each half to give Arsenal a two goal lead. This was followed up by a goal from substitute Alex Iwobi in the closing stages.

This meant Arsenal had only one corner compared to the visiting Burnley side that had three corner-kicks in the entire match.

Arsenal’s precision in front of goal ensured there was limited means for them to be caught in offside position that much in the match.

Burnley could afford not to as they were duly dominated by Arsenal in midfield this led to increased pursuit to get back into game especially with the match tied at 2-1 in the second period.

Burnley showed their willingness to get something out of this game as they matched the host physically. This led to series of tackles & fouls as the match wore on in the course of the 90 minutes.

Arsenal star reveals why Mesut Ozil is a good captain