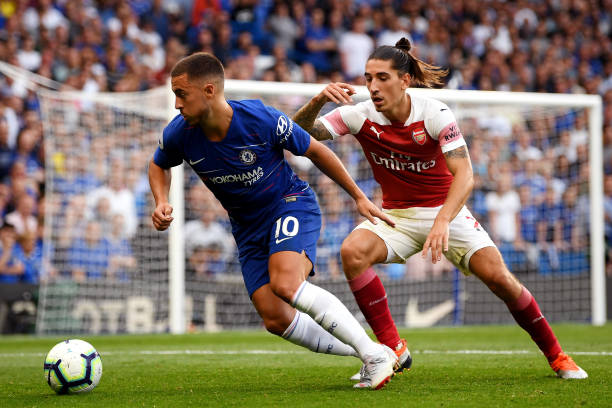 ( Chelsea Vs Chelsea / Photo via Getty )

Arsenal battles Chelsea for the three points this evening and it’s equally an important game for both sides who want to play UEFA Champions League next season.

We can liken this like a David and Goliath battle as the Blues travel a short distance to face Unai Emery’s side.

Arsenal must put on a good performance as their season mostly depends on this largely due to their precarious situation. With Arsenal needing a win over Sarri’s men, we evaluate the battle on which the result may consist from ahead of this London Derby.

Here are the 3 key battles as the case may be.

This promises to be an interesting contest as both players posses unique quality on the pitch. Hazard’s sense of humour and agility will be tested by the young Spaniard as battle ensues at the Emirates. I will be particularly interested to see Hazard’s willingness to take on the good ball playing defender (Bellerin) as we expect to see a lot of intelligence and shear class from the two players in the match.

Both players would mostly be involved in the aerial tussle especially in the Chelsea half as Arsenal go menacing in search for the goals. With maximum support and creativity backing the Frenchman, forward would definitely give Chelsea a hard time. He scored against Liverpool from an unusual position as he was set-up Nigeria’s Alex Iwobi who came onto add firepower to the Gunners attack on the occasion. But Luiz’s experience and confidence may be reliable as the match gets closer by the minutes.

Arsenal’s rhythm could consist of the German playmaker alongside (Matteo) Guendouzi and Lucas Torreira during the Chelsea tie.

However with Kante mobility coupled with his low center of gravity expect him to give the Blues a chance in midfield. The creativities Ozil brings may be too hard to curtail as he did a nice job to ripe Leicester City part at the Emirates. Would he do the same again as Kante and Wilfred Ndidi possess similar characteristics at the base of the midfield? The fact that Kante is really difficult to outsmart in midfield makes it a must watch as we get ready to the battles on the pitch.