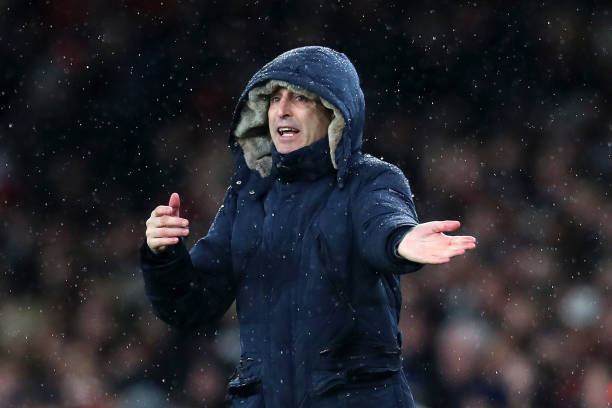 Mesut Ozil was in the starting eleven of Arsenal that played against Cardiff City and this was the first time that he got on the starting lineup for the first time since their 1-1 draw with Brighton & Hove Albion in December. This was a chance for Mesut Ozil to prove everyone wrong that he is an outstanding player but he however didn’t offer much offensively as one would have expected.

There has been a lot of speculation about the relationship between Unai Emery and Mesut Ozil this month because he was left out of the Arsenal squad that faced West Ham United at the Emirates Stadium, he was also an unused substitute in Arsenal’s 3 nil win against Chelsea. He came on as a substitute in the second half of Arsenal’s FA Cup game with Manchester United.

Unai Emery gave Mesut Ozil the arm band last night as the gunners got a 2-1 win over a relegation threatened Cardiff City side. The Arsenal coach faced the media after the gave to reveal his post-match thoughts about the game, one of the reporters asked him about Ozil and this is what he had to say;

“Another journalist asked me the same question. He’s in the four captains with Laurent Koscielny, Petr Cech and Aaron Ramsey. No 5 is Granit Xhaka, so it’s normal. When, for example, Koscielny’s injured and can come back to play, he’s captain.” Unai Emery told Arsenal’s official website.

“It’s the same with Mesut. He didn’t play some matches but it’s the same in the captain group.”