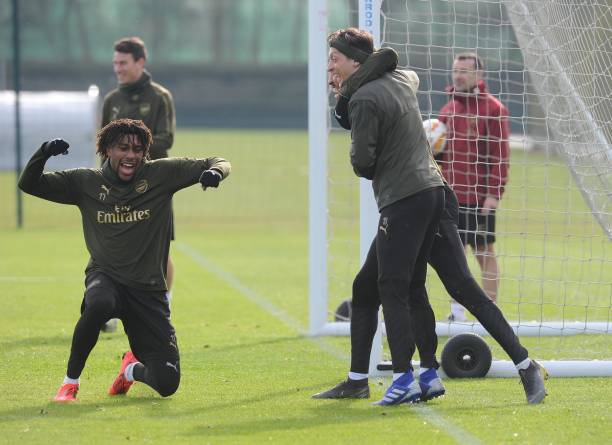 Arsenal welcomed Bate Borisov at the Emirates Stadium on Thursday for the second leg of their Europa League round of 32 encounter. Arsenal winger Alex Iwobi was once again in the starting eleven and he an incredible performance despite having got heavily criticized after his performance in the first leg.

Mesut Ozil also returned to the starting lineup last night as the gunners beat Bate Borisov 3-0 to qualify for the UEFA Europa League round of 16 and the Arsenal supporters were excited to see the midfielder back in the team because he had missed their last three matches. It seems it wasn’t only the Arsenal fans that were happy to see Mesut Ozil back into the squad but even some players like Alex Iwobi.

The Nigerian international worked well with Mesut Ozil in the final third of the pitch and he praised the German international after the match, and also said that he hopes that he keeps playing which is an indirect message to Arsenal’s boss Unai Emery who has omitted Ozil from the match day squad in more than one occasion.

“We know what Mesut’s like, we see him in training every day. He’s world class.” Alex Iwobi told Arsenal Media.

“You know we’ll create a lot of chances with him in the side so we just have to hope that we put our chances away and we’re able to score three goals from it, like today. So hopefully he continues to play.”

The next few months will be interesting because it seems some of Mesut Ozil’s teammates are not happy with the way the coach is treating him.

Report: Arsenal’s possible opponents in Europa League round of 16