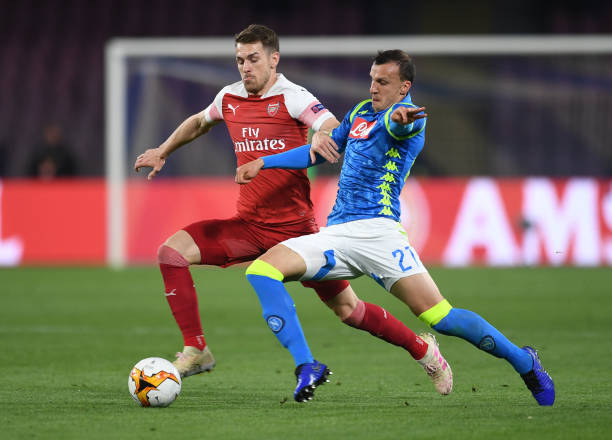 Arsenal defeated Napoli last night but they however lost their star midfielder Aaron Ramsey who was subbed off in the first half after he got a left hamstring injury. The Arsenal fans are frustrated because there are fears that this could be his last game for the North Londoners.

“He was in a very good moment, he was playing with a big behaviour and commitment to do something important for us.” Unai Emery told Arsenal’s official website.

“His injury today can give us some matches without him. I don’t know if we’ll see him again before the end of the season.”

The Premier League will be ending next month and the Arsenal fans were hoping to give him a final goodbye in his last match at the Emirates Stadium but it now looks like they will not be able to do it since there are fears that their game vs Napoli was the last match he played in for the North Londoners.

Arsenal has a high chance of going into the UEFA Europa League final in Baku and so there’s still a chance that Aaron Ramsey could be able to play in that game, if the gunners beat Valencia in the semi finals.

Arsenal receives a massive injury boost ahead of encounter with Napoli