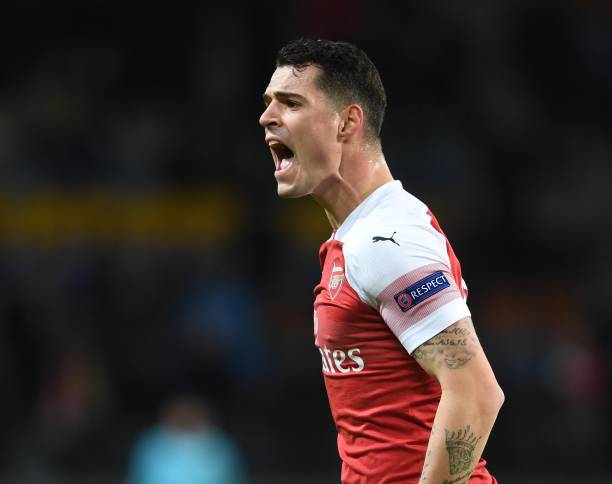 Granit Xhaka was impressive for Arsenal last season under Unai Emery but he however did do some unforgivable mistakes which some believe that they could have cost the gunners a chance to play in the UEFA Champions League in this upcoming season. Some gooners want Granit Xhaka to be sold and he has in the last few weeks been linked with a move to Inter Milan.

However, in an exclusive interview with Blick, Xhaka has confirmed that he isn’t aware of the rumours that are linking him with a move away from Arsenal.

“I am not aware [of Arsenal exit talks]. I have another four years on my contract, I only signed last year. I’m happy there, my family too. That’s the most important thing.” said the Arsenal midfielder.

Granit Xhaka arrived at the Emirates Stadium in the 2016 summer transfer window and he has become among Unai Emery’s favourites because he has never been dropped by the current Arsenal boss when he is fully fit to play, so it seems like he won’t be leaving the North Londoners any time soon.

Report: Aubameyang and Lacazette future’s about to be sorted by Arsenal

Yannick Carrasco reportedly on the verge of joining Arsenal