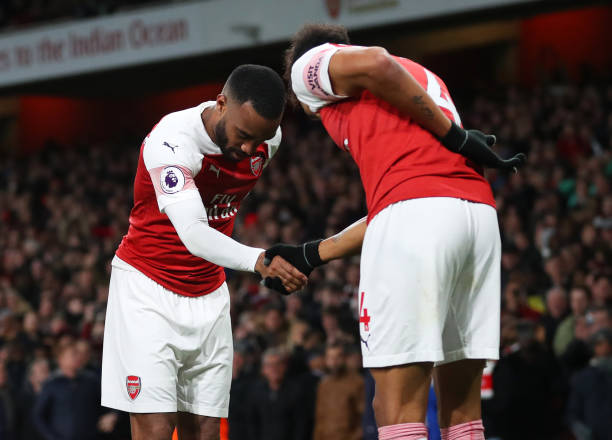 Alexandre Lacazette and Pierre-Emerick Aubameyang carried Arsenal throughout the 2018/19 campaign and the gunners will always be grateful that Arsene Wenger left them with two top strikers. Even though the gunners failed to achieve their target of getting Champions League football, Aubameyang and Lacazette’s contribution in the recently closed season can’t be overlooked.

The gunners have in the past years been losing some of their stars for free but Arsenal’s head of football Raul Sanllehi recently said in an interview that they will stop this during their reign and that they would try to be tying down players who have only two years left on their contracts. He said that they would either sell them or give them new deals so that they don’t lose them for free or be played by agents of the players.

The Football.London claims that Arsenal will soon offer both Aubameyang and Lacazette new deals to chase away the clubs that are interested in the two strikers of the North Londoners. Lacazette has been linked with either a move to Barcelona or Atletico Madrid while Aubameyang has been offered a big money offer from some Chinese club but he reportedly rejected it. The report claims that they will both start earning £200k a week wages at Arsenal.

Aubameyang and Lacazette scored a total of 49 goals for Arsenal last season and the gunners wouldn’t want to let go of either of them because it will take more than £50million to get replacements who will be scoring for the North Londoners those amount of goals.

Unai Emery puts an Arsenal star on the transfer market