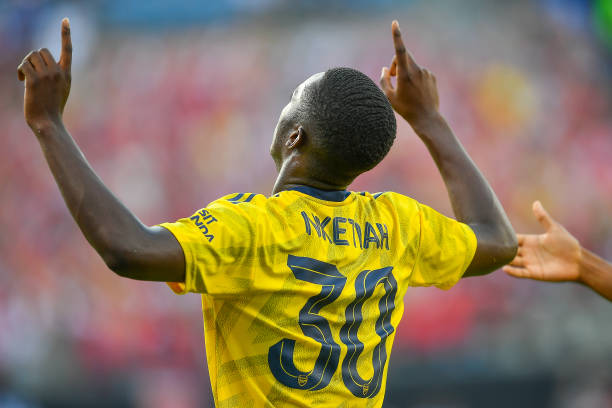 Arsenal defeated Fiorentina 3-0 last night and they will be ending their US tour on Tuesday when they face Real Madrid in Washington. The gunners started the game with a lot of youngsters and they didn’t disappoint Unai Emery as they were successful in containing Fiorentina.

Eddie Nketiah who has been impressive in the previous two matches continued with his form as he scored two more goals in this game and he will certainly hope that this gives Unai Emery second thoughts about loaning him to a Championship club as reports are saying that he could sent out on a season long loan.

The gunners used a midfield of Burton and Olayinka and these two weren’t that bad in this role as they did a great job of connecting the wing backs each time they got the ball in the middle of the pitch. Reiss Nelson was also given a start but he however unfortunately didn’t make the most of it but Bukayo Saka was however impressive once again as he combined well with Kolasinac in getting Arsenal’s first goal.

Eddie Nketiah’s movement is exceptional and this was seen in the first goal that he scored and his positioning is top-notch as he was at the right position when Lacazette received the ball in the box and the Frenchman passed to him and he scored. Shkodran Mustafi and Nacho Monreal are still worrying as the Fiorentina players were continually making them make mistakes which could have been costly in a competitive game.

CHARLOTTE, NC JULY 20: Arsenal’s Joseph Willock (right) is congratulated by teammate Mesut Ozil (10) after he scored a goal in the second half during the International Champions Cup match between Arsenal FC and ACF Fiorentina on July 20th, 2019 at Bank of America Stadium Hank in Charlotte, NC. (Photo by Rich von Biberstein/Icon Sportswire via Getty Images)

The second half of the match was impressive after the introduction of other players like Ozil, Lacazette, Mkhitaryan, Willock and Martinelli. Martinelli had a superb chance to get on the score sheet after making a fantastic run but his finish was disappointing.

Joe Willock got on the score sheet a few minutes after Martinelli’s miss and Lacazette was once again who made the assist. It was overall a nice game with the youngsters impressing but the Arsenal defence was worrying.