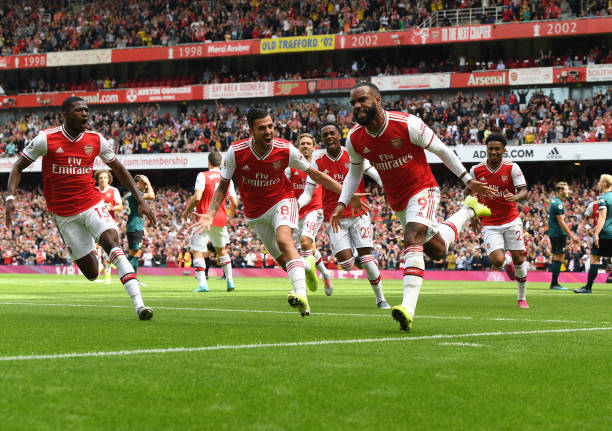 Arsenal made it two wins in two matches yesterday after it defeated Burnley at the Emirates Stadium thanks to two wonderful goals from Alexandre Lacazette and Pierre-Emerick Aubameyang. Burnley has always been a tough side for Arsenal as its playing style is similar to that of Stoke City but the gunners were however able to hold onto a win despite the visitors putting on a physical performance.

Lacazette was brought back into the starting eleven and Dani Ceballos got his first start and the young Spanish international put on an incredible performance as he made two assists including one that saw, Lacazette open the scoring for the gunners in the first minutes of the game after he made a turn and forcefully made a shot which went into the back of the net.

Arsenal having played without Granit Xhaka had to play Joe Willock and Matteo Guendouzi in a double pivot and these two did put on a decent performance but they however got a bit relaxed after the gunners went ahead and continually lost the ball numerous times hence ending some great counter attacks. Reiss Nelson was also not effective on his flank.

Burnley then got an equalizer through Barnes after a deflected shot found him in the Arsenal penalty box and despite Matteo Guendouzi’s will to stop the ball, the gunners still conceded for the first time this season. Arsenal later on started a wonderful move which saw Reiss Nelson score just before halftime but the goal was flagged offside.

Unai Emery decided to bring in Nicolas Pepe at the start of the second half and the Ivorian international made instant impact as the gunners were now fluid in attack but were however still unable to break down the defence of Burnley. Later on, Dani Ceballos won the ball in the middle of the pitch and it went straight to Aubameyang who put in an outstanding shot which went into the back of the net. Emery then brought in Kolasinac to go to a back three at the expense of Lacazette and it worked well as the gunners didn’t concede more chances as before.

The gunners later brought in Lucas Torreira in the last minutes of the game and the Uruguayan international almost scored but his shot was however saved by Pope. Despite the nervousness, Arsenal got all the three points and Unai Emery will now have to focus on their next game against Liverpool.