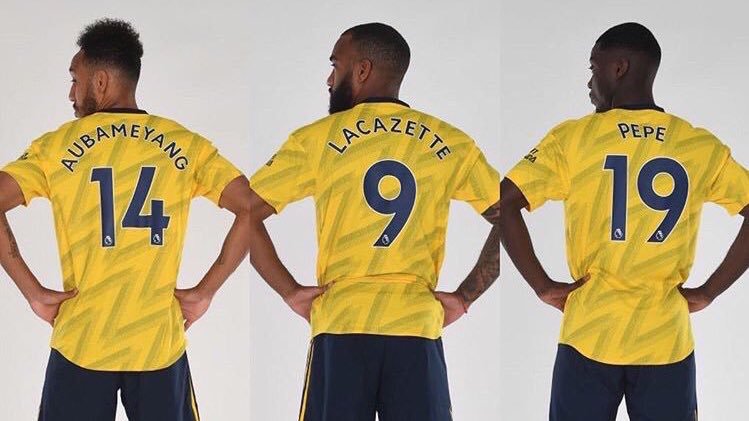 Arsenal will this weekend face Liverpool away from home and everyone is certain how this will be the first time that the gunners unleash their new attacking trio of Aubameyang, Lacazette and Pepe since Unai Emery has confirmed that they are all ready to play together.

Liverpool have one of the best front three in Europe as Salah, Mane and Firmino scored a combined 69 goals in all competitions last season but the gunners will however be optimistic that their new front three will atleast try to get to similar numbers in this 2019/20 campaign. Pierre-Emerick Aubameyang has claimed that he believes that Arsenal’s new front three has similarities with that of Liverpool if you look at the playing style of all the six players.

“I see a lot of similarities, Pepe and me, we are quick players like Mane and Salah, while Laca is a player who can keep the ball and is really good with his feet like Firmino. So yes, we can say we are close enough.” Aubameyang told Sky Sports in an exclusive interview.

Aubameyang and Lacazette scored 39 goals for Arsenal in all competitions last season and Nicolas Pepe also scored 22 goals for Lille, so the North Londoners will be hoping their new front three improves them this season as the club can’t spend another season in the UEFA Europa League. Aubameyang has already spoken that is ready to play wide so that Lacazette and Pepe could both start.

Aubameyang statement is somewhat right as Lacazette is great on the ball and could do Firmino’s role well and Nicolas Pepe is a great winger so hopefully, these three players improve Unai Emery’s team.

Bellerin tells Arsenal fans on what to expect from Dani Ceballos