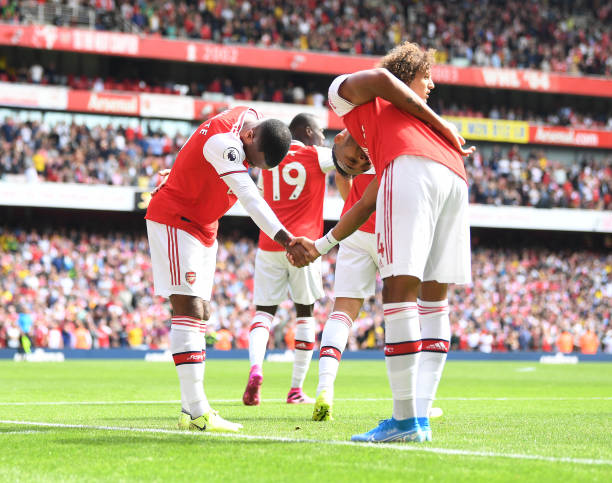 Tottenham Hotspur will today be welcomed at the Emirates Stadium by Arsenal and both sides will be hoping to get back to winning ways since they lost last weekend. Arsenal boss Unai Emery will be expected to make the required changes to the squad that faced Liverpool last weekend since his choice of lineup and formation raised a lot of criticism. So here’s Arsenal’s predicted lineup to face Tottenham Hotspur with all eyes on Aubameyang and Lacazette.

Bernd Leno is Arsenal’s first choice goalkeeper and even though he did concede three goals last weekend, he will be in between the goal posts today.

Since Nacho Monreal has left Arsenal, the gunners will use Sead Kolasinac in his position even though he is best suited as a wingback. Emery did say in pre-season that Kolasinac needs to learn to play in a back four so him and Ainsley Maitland-Niles will be the fullbacks today.

Sokratis and Luiz will also be in the starting eleven as they are Emery’s first choice centre backs.

Aubameyang and Pepe started Arsenal’s last match and they seemed to have a good connection with each other, so these two could start together on the flanks with Dani Ceballos in the no.10 position as Mesut Ozil might not be fully fit to play.

Lacazette did not start in Arsenal’s 3-1 loss to Liverpool but he could get back into the starting eleven since the gunners want to unleash their own attacking trio this weekend.

Emery speaks out on playing Aubameyang, Lacazette & Pepe ahead of Spurs game