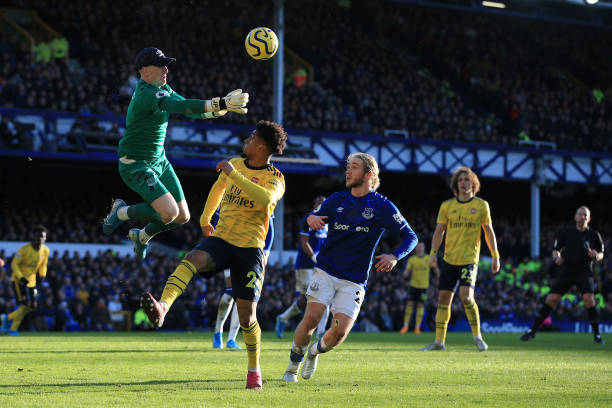 ( Everton Vs Arsenal / Photo via Getty )

Arsenal was today welcomed at Goodison Park by Everton and the two sides who were both being coached by interim head coaches made a 0-0 draw. The gunners came into this match with a youthful squad and the expectations were low but the Arsenal fans will definitely be a bit disappointed that they did not get all the three points from this toothless Everton side. Let’s take a look at the things that we noticed from the game.

1. ARSENAL DEFENCE WAS SOLID FOR ONCE.

Arsenal have got their first clean sheet in 15 matches and this holds more weight since this was an away game and the North Londoners are well-known for collapsing away from home. The gunners had makeshift fullbacks but they both did a great job as they didn’t let the Toffees make many crosses.

Granit Xhaka and Torreira’s partnership was fantastic as they provided cover for the defense and did help in initiating a number of attacks. Nelson and Martineli might have not impressed upfront but they did help the fullbacks a lot of times. Chambers and Luiz were a bit shaky but still managed to get the clean sheet.

2. ARSENAL WAS TOOTHLESS IN ATTACK

Arsenal started with an attacking front four of Martinelli, Smith Rowe, Nelson and Aubameyang and as expected, they were sometimes bullied off the ball. Martinelli wasn’t at his best today as he continually made poor crosses and shot the ball wide in one of Arsenal’s best chance of the game in the first half. Nelson and Emile Smith Rowe showed their impressive skills but they however failed to have a stamp on the game.

Aubameyang was a bit lazy in the first half but he almost scored for the gunners in the second half but was denied by Jordan Pickford.

3. SOME OF FREDDIE LJUNGBERG’S DECISIONS WERE CONFUSING

The gunners changed their lineup from the one that played against Manchester City and even though that was understandable but his substitutions were confusing as he chose to bring in Willock first when both Lacazette and Pepe were on the bench. Willock failed to have an impact on the game.

Lacazette was then later put on in for Aubameyang instead of letting both of them be on the pitch and remove Reiss Nelson. Nicolas Pepe was unused sub and these decisions by Freddie seemed like one of a person who wasn’t trying to win the game but rather avoid the loss. Freddie Ljungberg’s six game spell ends with him getting one win, three draws and two losses. Mikel Arteta starts work tomorrow.