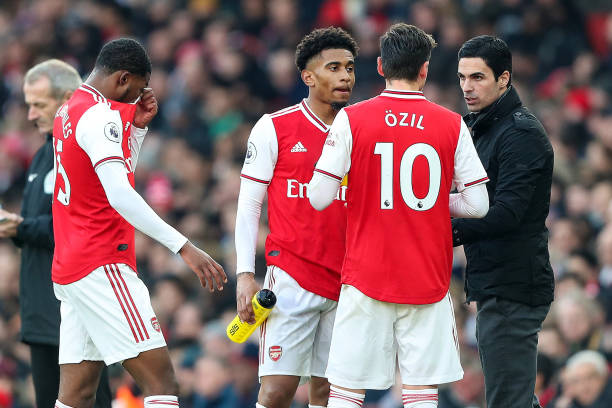 The gunners started the season with a lot of optimism after having had a successful transfer window but they instead have been in a rollercoaster of a campaign with many sagas like that of Mesut Ozil’s drop from the squad and Unai Emery’s delayed sacking.

The Arsenal board decided to make a bold decision and appoint Mikel Arteta as their new head coach in December, 2019 and the Spaniard has had a great start to his coaching career as he has two won of his first four matches. Arsenal midfielder Mesut Ozil has been one of the main beneficiaries of the appointment of Mikel Arteta as the new gunners boss has started him in all of his first four matches.

Mesut Ozil has opened up to the press about life under Mikel Arteta and he has claimed that the whole squad is happy with the arrival of the former Manchester City assistant because he is trying to implement the old playstyle of the North London club. The German World Cup winning midfielder says that Arteta has already implemented a structure at the club and that everyone in the squad knows what his job on the pitch is, and this is something the Arsenal fans will be happy with as most reports claimed that the players didn’t understand Unai Emery.

“It is basically getting us back to the old Arsenal virtues. Having the possession, being in control of the game, having the ball all the time.” Mesut Ozil told the Evening Standard.

“These are the things that he is working on with us and you can see it – everyone is smiling, laughing, enjoying their time at the moment and this has made us be successful now.”

“We are really enjoying everything at the moment. You can see we have a structure on the pitch now. Everyone knows what their job is on the pitch and we are very happy to have won these two games [against United and Leeds].”