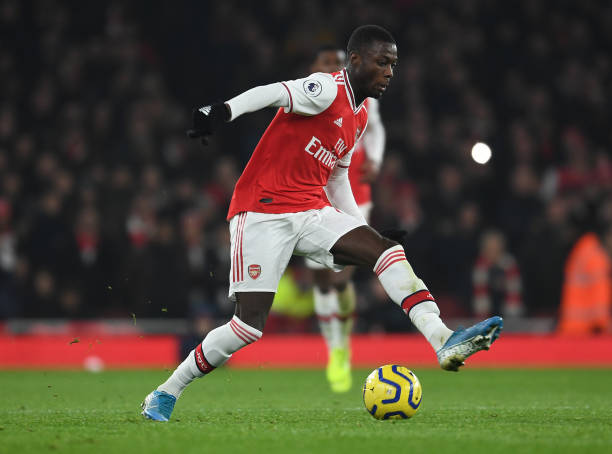 Arsenal completed the signing of Nicolas Pepe from Lille for £72million in the summer transfer window and they were hoping that he would be able to relieve Pierre-Emerick Aubameyang from the burden of scoring goals but he has however managed to only get five goals since he came in hence many calling him a flop. Arsenal’s head coach Mikel Arteta is hopeful that the gunners will see the best of Pepe before the end of the season.

Nicolas Pepe was very impressive for Lille last season, scoring 21 goals and as well as getting eleven assists but he has however struggled to adapt to the Premier League this season as he has only been able to get three league goals with one being penalty. Arsenal’s head coach Mikel Arteta has however come to his defence saying that the fee that was paid for Pepe automatically puts him a tough position but also claimed that the Ivorian international needs to be consistent, and show that he deserves to always be in the starting eleven.

“The price that we paid for him puts him in a difficult position straight away because he’s going to be compared to players of that calibre.” Arteta told Goal.com.

“First of all the team has to sustain his ability and give him as many opportunities as possible during games for him to be able to execute his qualities.”

“The other thing is he has his own responsibility, that’s for sure. He has to be more consistent in his performances.”

The gunners will be hoping that Nicolas Pepe manages to go on a good run of form in these last months of the season because he was brought to the Emirates Stadium with the hope that he would be able to help them get back into the UEFA Champions League and he still could as winning the UEFA Europa League grants automatic qualification to next season’s UCL.