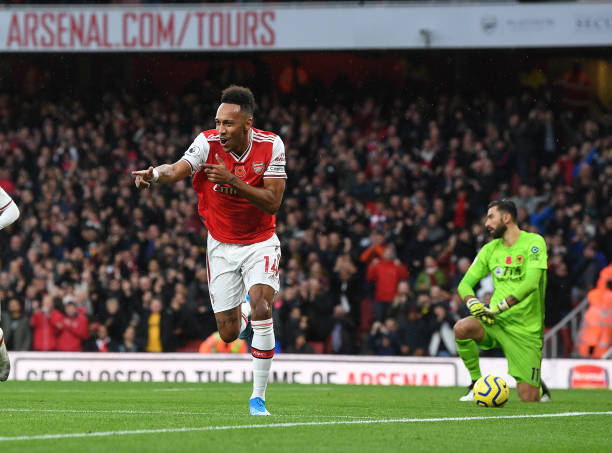 Arsenal striker and captain Pierre-Emerick Aubameyang has been impressive for the gunners in the last 18 months and this has seen him get linked with many other top European clubs like Barcelona. Aubameyang was among the three players that won the Premier League golden boot last season and has already scored 14 league goals this season.

Barcelona striker Luis Suarez has been ruled out for a few months and the Catalan club tried to sign Pierre-Emerick Aubameyang in the recently closed January transfer window but they were however unsuccessful in their pursuit since the gunners never wanted to sell the 30-year-old right now since he is their best player and they wouldn’t be able to get a replacement in time.

Barcelona could however come back for Aubameyang in the summer transfer window as their technical secretary Eric Abidal has spoken out about their interest and also confirmed that the Gabon international fits the profile that he would be looking for.

“I know him (Aubameyang). I do not have much to do beyond sports. He has a profile that has depth. He is important, and in his team he is decisive. It is good to bring this profile of player who can be in the market and can help you. We’ll see what will happen.” Abidal told Catalan newspaper Sport as quoted by Sports Witness.

Pierre-Emerick Aubameyang is yet to sign a new deal with Arsenal and he will have just one year left on his current deal in the summer and there hasn’t been any signs showing that he is close to committing his future to the North London club. Aubameyang has always said that he wants to play in the UEFA Champions League and Barcelona’s technical secretary Eric Abidal confirmed in the same interview that they will still be looking for a no. 9 in the summer.

“It is logical that in summer a ‘9’ will come. It is a necessity. We know that Suarez will come back strong, but you have to bring a top player in the summer.” said Abidal.

“We do not know if it will be young or experienced. We only look at the talent and adaptation they may have. We must think that some top players have come and have not adapted well.”

Mikel Arteta reportedly identifies players to sell in the summer