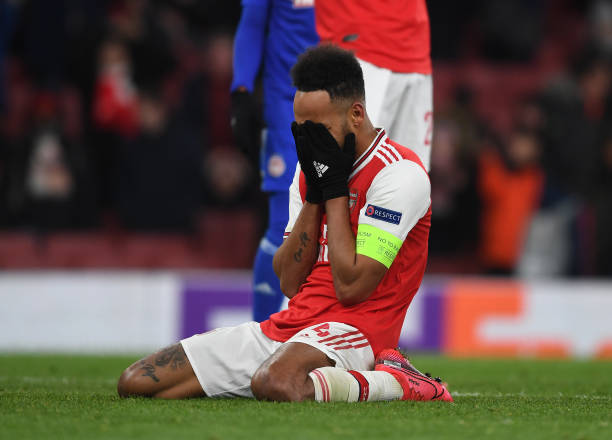 Arsenal striker Pierre-Emerick Aubameyang will soon enter the final year of his current contract at the Emirates Stadium and the North Londoners are yet to tie him down to a new deal and he is now getting linked with a number of clubs. New reports from England are now reporting that the gunners will now be looking to listen to offers for Aubameyang.

Pierre-Emerick Aubameyang joined Arsenal in the 2018 January transfer window and he has been an outstanding signing as he has scored 61 goals in all competitions since he arrived in less than 100 appearances which is something that shows how he is an incredible player as he didn’t need time to adapt to the Premier League as most players from abroad require.

Arsenal have been trying to renew Aubameyang’s deal for a while now but there hasn’t been any progress due to a number of reasons and now the Daily Mail is reporting that the gunners have decided to end any talks of a contract renewal for the Gabon international as they won’t be able to give him a new big contract when the club has taken massive losses due to the coronavirus pandemic. The report also claims that Arsenal will now be willing to listen to offers for Aubameyang from clubs in the summer transfer window so that they don’t lose him for free and they will also say that Barcelona and Inter Milan are interested in him.

Aubameyang has been Arsenal’s best player in the last two seasons and it will be interesting to see how the club handles this situation as they would receive a lot of backlash if they sold him to a direct Premier League rival. Arsenal recently announced how their players had accepted to take 12.5% pay cuts in order to financially help the club to survive in this pandemic and so it is no surprise that Arsenal might halt any plans of giving Aubameyang a new mega money contract and the report by Daily Mail also says that the Gabon forward wants to play in UEFA Champions League and the gunners can’t guarantee that for now.