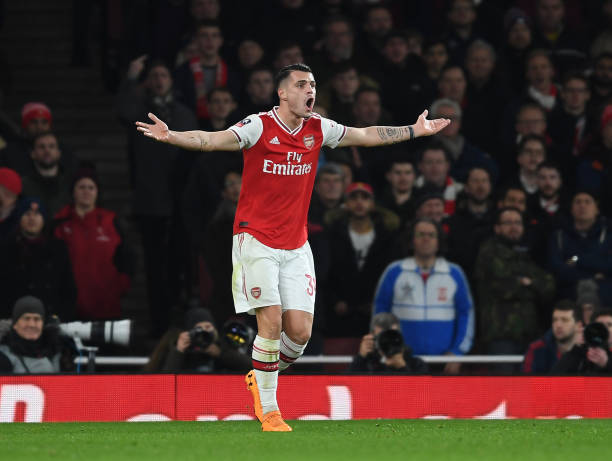 Granit Xhaka has been at Arsenal for four years now and he has in that period received a lot of criticism from the fans and pundits but that will never reach at the level of what he got when he had a bust up with the fans at the Emirates Stadium in a game against Crystal Palace in November. The Swiss international has however spoke out how Mikel Arteta has helped him to recover from that period.

Granit Xhaka was performing poorly in Arsenal’s match against Crystal Palace and Unai Emery decided to sub him off but he then received a lot of boos from the supporters at the ground hence him also giving it back in an unprofessional manner. Most football pundits said that would be the last time that Xhaka plays in an Arsenal shirt but fast forward, five months later, he is still at the Emirates Stadium.

Xhaka was linked with a move back to Germany in January and he has also indeed confirmed this, and says that he thought that it would not be great to leave Arsenal after having been there for four years. The Swiss international says that he has had a great relationship with all Arsenal managers but says that his experience with Arteta has been special as it has been some sort of reset for him, he also praises the Spanish coach saying that he believes that they’ll have a lot of fun with him.

“Everyone has their own character, their own philosophy and also their own way of doing things. With Mikel, however, I’ve had something of a new start, a reset.” Granit Xhaka told Sport 1.

“I had very good conversations with him right from the start, in which he showed me what he expected of me, how much he needed me in the team and how much he valued me as a player. It was very motivating and convincing for me.”

“With Mikel you immediately notice that he has a very wide-ranging, long-standing know-how that he passes on very well to the team. He is absolutely professional, pays great attention to discipline, team spirit and is open and direct in communication. I am convinced that we’ll have a lot of fun with him.”

Latest on Mkhitaryan’s future, Szczesny’s feelings about the club and more in Arsenal’s evening news roundup