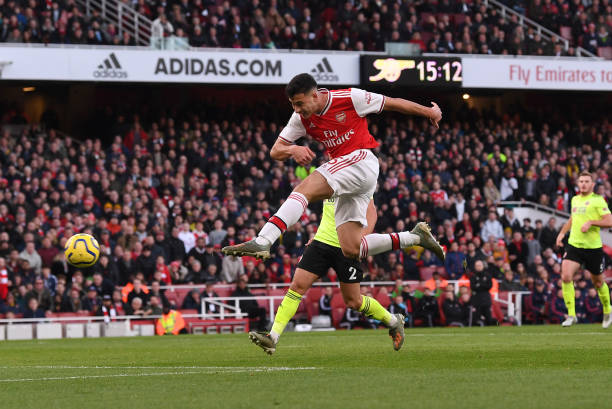 Arsenal completed the signing of Gabriel Martinelli in the summer transfer window from Ituano for a fee reported to be €6million and he has been impressive at the Emirates Stadium as he has scored 10 goals as well as making two assists in his first season in England. Arsenal goalkeeper Bernd Leno has spoken out on Martinelli’s quality and future.

The gunners were linked with a move for Gabriel Martinelli since January, 2019 and so it was no surprise that he became Arsenal’s first summer signing but what many people didn’t expect is him playing in the number of games that he played in since most gooners believed that he would spend most of the time in the Under 23 squad.

Martinelli was however impressive in his first start as he scored two goals in the League game against Nottingham Forest and he has since then went on to score other eight goals including a wonderful one against Chelsea in a London Derby. Arsenal goalkeeper Bernd Leno has been impressed with the young Brazilian international and says that his mentality might be the deciding factor that helps him to become a world-class player.

“He can become a world-class player. World-class 100 per cent because he has talent, he has quality but I think his biggest strength is his mentality.” Martinelli told SoccerAM.

“I remember in our bad time when we struggled a lot, he was working so hard, he was one of the leaders and at 18 years-old he came from nowhere, nobody knew him before and to play like this, to behave like this is very good to see. I think if he keeps going like this he will be an unbelievable player.”

Martinelli hasn’t started many games under Arteta but he has however still been able to bag in two goals against Sheffield United and Chelsea and so he will be looking forward to the restart of the Premier League so that he can return to the starting eleven. Leno has on the hand been impressed with the 18-year-old and is backing him to succeed at the Emirates Stadium.