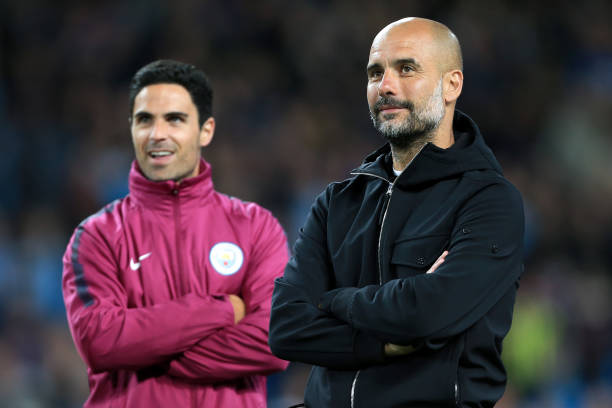 Arsenal will tomorrow face Manchester City at the Etihad Stadium and the whole world will be watching since it will be the second Premier League game since the competition came to an abrupt stop due to the COVID-19 pandemic two months ago. The gunners will come into this match with the hope of getting the three points so that they can atleast leapfrog their arch rivals Tottenham Hotspur who are just one point ahead of them on the Premier League table.

Manchester City on the other hand have nothing to lose in this game because they realistically have failed to provide a big title challenge against Liverpool as them losing against Arsenal would allow The Reds to win the Premier League title in its next game. Pep Guardiola will however still want to probably finish second as it’s still not certain whether their ban by UEFA will be implemented as their appeal will receive a verdict in July and so they can’t take a UCL spot for guaranteed.

Arsenal head coach Mikel Arteta will obviously come into this match with a point to prove as he will not only want to beat his former boss but will also want to prove to the gooners that he is the right man to take them forward by finally getting their first away win over a big six club since 2015. This will be Arsenal’s best opportunity of ending this embarrassing stat as Manchester City will be without their home support and they will also not be fully fit as they have not played in the last two months.

As you can see, Arsenal have lost in their last five meetings with Manchester City and so the fans will hope that Mikel Arteta is the person to finally end this since he is someone who knows him very well after working with them.

Arsenal Vs Olympiacos: All you need to know