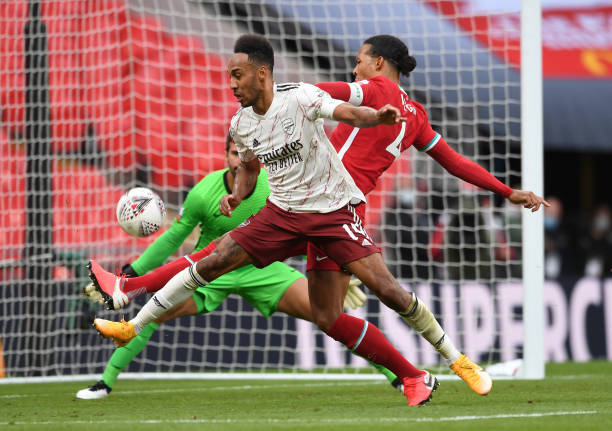 Aubameyang in action for Arsenal during the Community Shield final at Wembley. (Photo by David Price/Arsenal FC via Getty Images)

Arsenal’s first test of a big side in the Premier League comes against Liverpool at Anfield.

It will be the first of the double-header as Arsenal will again play Liverpool on Thursday night in the Carabao cup.

Both sides have a 100% record going into this match with 2/2 wins but Liverpool have the upper hand in the tie having not lost at Anfield in the League since April 2017.

However Arteta’s side will go to Anfield with confidence having come out on top in the two recent meetings with Liverpool.

Arsenal could welcome Kieran Tierney back into the team after he missed the 2-1 win over West Ham with an injury sustained during a warmup.

The Gunners will be without Martinelli, Chambers, Mari, Mustafi and Smith-Rowe while Tierney and Sokratis remain doubts.

Arsenal will be glad to have Tierney back as he has been in fine form. (Photo by Stuart MacFarlane/Arsenal FC via Getty Images)

Lacazette is expected to spearhead the attack having scored in both league games this season.

Manager Mikel Arteta rested several key players during the 2-0 win at Leicester midweek and is expected to field his best side as he strives to end Arsenal’s poor record away from home vs the big six.

The Predicted team that will play against Liverpool

Related Topics:ArsenalLiverpoolMatch Preview
Up Next