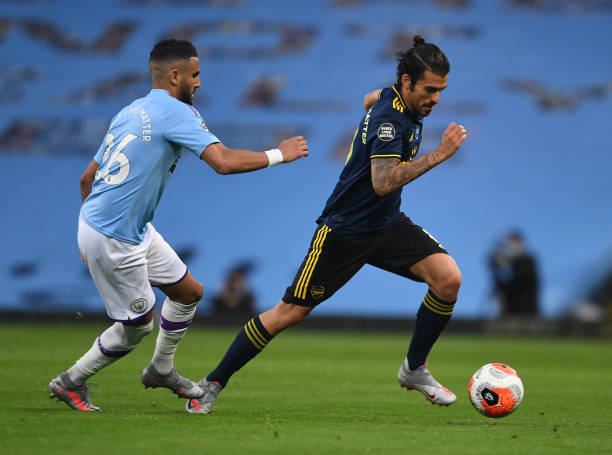 Man City vs Arsenal at the Etihad stadium earlier this year. (Photo by Stuart MacFarlane/Arsenal FC via Getty Images)

Arsenal take on Man City away from home in their fifth league match. Arsenal beat Sheffield United 2-1 before the international break and made it 3 wins in 4 games.

A real test for Arteta’s team as Manchester City have been a sharp thorn to Arsenal. The Gunners have failed to beat Man City in the league since 2015.

Arsenal will be without Mustafi, Mari, Chambers, Smith-Rowe and Martinelli as they are yet to recover from their injuries.

Some positive news is Kieran Tierney and Aubameyang  will be available for selection, Tierney was isolating after he was in contact with a player who had the CoronaVirus but he has been permitted by authorities to play while Aubameyang has recovered from a minor injury he got on international duty.

New signing Thomas Partey could make his debut, playing at the base of Arsenal’s midfield.

Statistics don’t favour Arsenal as their last away win against a big six side was way back in 2015 against Man City, the Manchester side have given Arsenal a headache both home and away in the league for the past few seasons. Arsenal’s confidence will be from the 2-0 FA cup win against Man City in July and their struggling start to the new season.

Related Topics:ArsenalManchester CityMatch Preview
Up Next

Rapid Vienna vs Arsenal: All you need to know