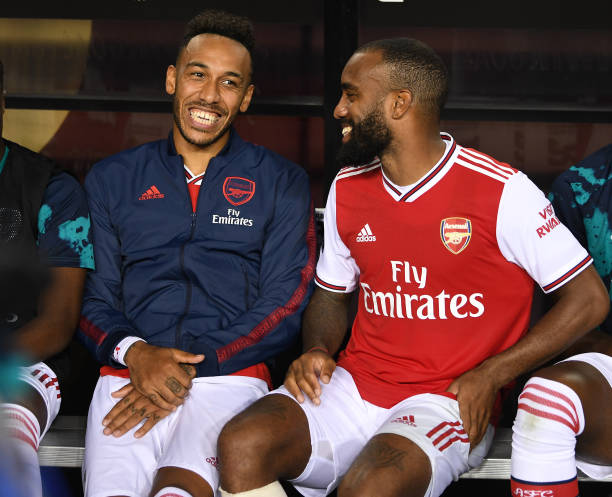 Pierre-Emerick Aubameyang gave Arsenal an early lead against Crystal Palace as he finished from a tight angle. The Gunners then managed to avoid defeat after conceded twice with Alex Lacazette scoring with the last kick of the game.

The duo on Monday proved that despite being in their 30s they can still bang in the goals. Lacazette reminded Arteta why he shouldn’t be sitting on the bench.

The French striker has been limited to substitute appearances in the league and whenever introduced he has looked very superb and energetic.

Arteta will now have a dilemma on how to utilize the duo that once played some of their best football together under the Spanish manager and his predecessors.

Aubameyang’s recent struggles when deployed on the left-wing, the rise of Emile Smith Rowe and Bukayo Saka have led to the partnership rarely starting together.

The game against Crystal Palace showed why neither of the two should be sitting on the bench and that they can start together like they used to with the right tactics.

How Aubameyang and Lacazette can start together

In a 4-2-3-1 with Aubameyang playing wide on the left and Lacazette playing as the central striker.

However, the left-wing position will just be Aubameyang’s starting position, pushing up on the counter attack or when defending. When attacking especially when possession based he moves into the inside forward channel between the opposing right-back and centre-back while Kieran Tierney bombs forward down the left flank.

The stats show the Arsenal captain has thrived while playing on the left with 0.85 goals per 90 compared to 0.60 goals per 90 when he has played as a lone striker (stats based on Premier League games from the 2017-18 season).

Lacazette offers pace, strength, balance, technique, link-up and hold-up play which can be useful especially when breaking down a low block team.

Mikel Arteta speaks out on Alexandre Lacazette amid uncertain future