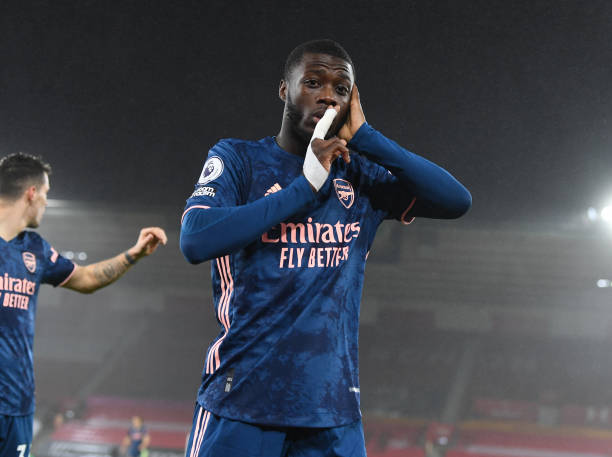 Arsenal’s record signing Nicolas Pepe has failed to secure himself a place in Mikel Arteta’s starting eleven and his game time has now been limited to Carabao Cup and substitute appearances.

The belief was that after a pre-season campaign and a promising end to last season, the Ivorian winger would finally be settled in and the Gunners finally begin to reap from their £72m investment.

Bukayo Saka and Emile Smith Rowe have managed to cement themselves in the starting eleven on the right and left side, leaving Arsenal’s record signing on the bench.

Pepe’s problem has been inconsistency ever since he joined from Lille in 2019 and his style of play has been frustrating at times.

Rumours circulating have suggested that the 26-year-old could be sold off for as little as £25m.

What can Arsenal do to try and get the best out of Pepe?

Nicolas Pepe has failed to deliver on expectations.(Photo by Stuart MacFarlane/Arsenal FC via Getty Images)

If Arsenal decide to sell Pepe now they wouldn’t recoup half of what they spent and not to mention the club is yet to complete the installment payments.

Perhaps a loan move away from the Premier League would help revive his form and the Gunners could recoup at least half of what they spent if he impresses on loan.

Arsenal’s absence from a European competition has limited Pepe’s possible playing time and a continued lack of game time is denting his confidence.

If he is somewhere playing regularly it will boost his confidence and he could rediscover the kind of form that saw him score 16 goals last season or the 23 goals he scored for Lille before moving to north London. He then returns as a better player or Arsenal cash in on him.

Gunning for Glory in Fantasy Football