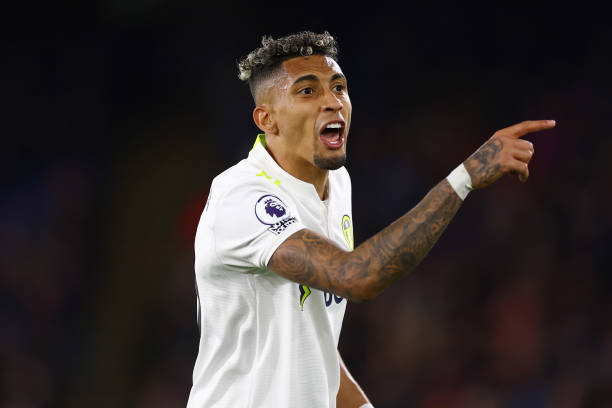 Arsenal has in recent weeks been linked with many interesting players since the gunners seem to be willing to spend big in this summer transfer window as they want to be very competitive next season. Among the players that the gunners are linked with is Leeds United’s Raphinha and so we are going to take a look at the way the gunners might lineup with him next season.

The predicted lineup doesn’t account for any new signings or outgoings of Arsenal as its for current players at the Emirates Stadium with the only addition being Raphinha.

The addition of Raphinha would improve the Arsenal team a lot as his immediate contribution would be goals and this is something that the gunners had problems with last season as after Pierre-Emerick Aubameyang went off form, they failed to score goals until the insurgence of Bukayo Saka and Martin Odegaard who helped them in many games in the 2021/22 campaign.

Even though Raphinha is an outstanding player but he however would however occupy the right wing position of Arsenal which Bukayo Saka seemed to have excelled in last season. Though one could say that Saka and Raphinha could continually rotate but it’s however likely that Mikel Arteta wouldn’t accept to bench the young Englishman and would rather start them both with, Bukayo coming in for Gabriel Martinelli on the left.

Fabio Vieira’s shirt number gets revealed ahead of official announcement

How Arsenal will lineup after signing Jesus, Tielemans and Vieira