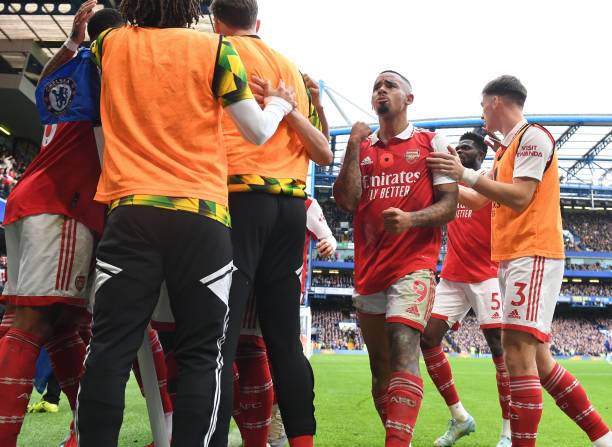 The Premier League like all leagues in Europe will go on a break for at least one month due to the 2022 World Cup Qatar but Arsenal will be a club that goes into this holiday with a big smile on it’s face. Arsenal went five points ahead of Manchester City on the Premier League table ahead of this World Cup break but Gabriel Jesus has however sent a message to the fans on the title race.

Manchester City have been chasing Arsenal this season ever since the gunners solidified themselves in the first place on the Premier League table and things are starting to become intense between the supporters of both sides as they are, both tuning in to watch each others matches. Arsenal supporters were overjoyed on Saturday when it got confirmed that Manchester City had lost to Brentford as The Citizens are the closest to the North Londoners.

Arsenal then also went on to win their game 2-0 against Wolverhampton thanks to goals from Martin Odegaard and Gabriel Jesus has however advised that they (gooners) shouldn’t focus so much on how other teams perform but that they should rather make sure they do their job.

“We cannot look to others. We know Man City, obviously, I know them more than most people.” said Gabriel Jesus as per The Mirror.

“But we have to do our job. We know the Premier League is not easy, it is the toughest league in the world. It is not only Man City – it is Liverpool, Man United, Chelsea. What can we do? Just focus on ourselves that is all.”

How the current Arsenal has challenged Arsene Wenger’s title prediction

Odegaard reveals what Arsenal must do after the World Cup