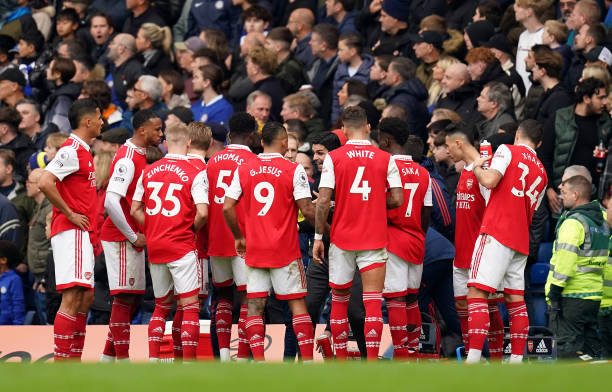 Arsenal remains on top of the Premier League table after defeating Chelsea at the Stamford Bridge which has further emphasised how the North Londoners are one of the biggest heavyweights of this season. This will be Arsenal’s last match before the start of the World Cup and so Mikel Arteta will hope that the break starts when they are still top, and so we are going to take a look at how the North Londoners are likely to lineup.

Aaron Ramsdale is the first choice goalkeeper of Arsenal and so he will definitely be in between the goal posts on Saturday.

Zinchenko has been impressive this season and the fans are so happy that he is back in the squad. So Zinchenko and White will start as fullbacks while Saliba & Gabriel will hold the defence in the middle.

Granit Xhaka and Thomas Partey have formed a great pivot this season and they will probably still start once again in this game against Wolves.

Gabriel Martinelli, Martin Odegaard and Bukayo Saka have been incredible in the midfield of the gunners this season, and so they will definitely be in contention to start the game.

Arsenal striker Gabriel Jesus will lead the line for the gunners in the game against Wolves.

Predicted Arsenal lineup to face Brighton with all eyes on Nketiah