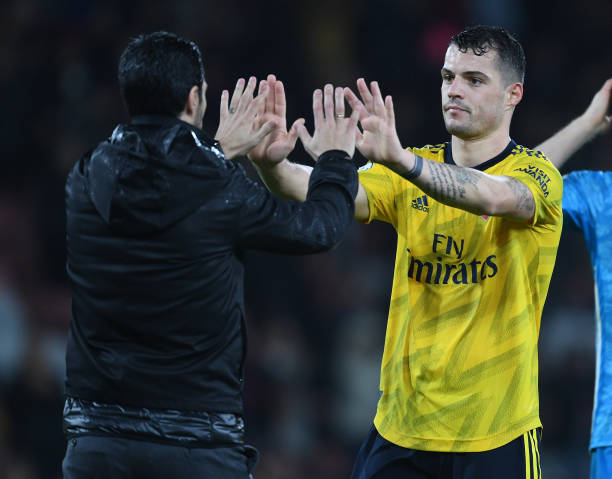 Granit Xhaka, Arsenal’s Swiss international midfielder, has fondly praised Mikel Arteta, his boss at the Emirates Stadium, who has made a big impact since taking charge of the Gunners in December.

Xhaka, who joined the North London club in 2016 from Borussia Mönchengladbach for a reported fee of around £35 million, believes that things are heading in the right direction under Arteta after his shaky start to life in England’s top league.

The 28 year old admitted that when Arteta first arrived there were doubts if he was up to the challenge and if he would be able to turn things around for the the third most successful club in England. But Xhaka believes that with the Spaniard’s tactical genius combined with a personable approach he has been able to get more out of the squad.

“Last season, we lost the first three games of the season. Some people were already at the end of their patience. But now you see what can happen when you give a coach time. After all, this is his first-ever stint as head coach. He is something very special. Said Granit Xhaka telling 20 Min.

“I’ve had many coaches in my career, but never one like Arteta. He seems like he is focused only on football 24 hours a day. He always has a plan A, B – and maybe even a plan Z. But he’s not only top tactically, but he’s also top as a person.”

Xhakas influence on the team shouldn’t go unnoticed either as he has assumed responsibility as captain even though he isn’t the one wearing the armband. Inspiring his teammates through what has so far been an outstanding season that has a high chance of leading the gunners to their first Premier League trophy for the first time since 2004.

In conclusion Granit Xhaka has said nothing but good things about his manager Mikel Arteta since taking charge; believing that basically with time things are starting to click into place at Arsenal due predominantly to their world class managerial appointment – it looks like both are now having positive effects at The Emirates Stadium as results continue getting better each week.