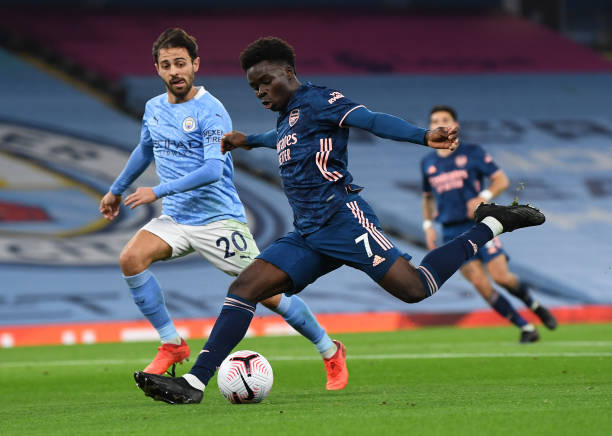 Arsenal face a mighty challenge in the fourth round of the FA Cup as they travel to the Etihad Stadium to face Manchester City on Friday 27th January 2022. Following their thrilling 3-2 win against Manchester United in their last Premier League match, Mikel Arteta’s side will look to capitalise on that form and put one over Pep Guardiola’s star-studded team.

Expected to be selected between the posts will be Aaron Ramsdale even though most football managers use their second choice goalkeepers in cup games, Mikel Arteta has shown that he feels all matches are important.

To partner up with Gabriel Magalhaes at center back should see William Saliba continue their impressive run of games in the Arsenal defence.

In the left black position, Tierney looks almost certain to start as Mikel Arteta might try to give a much needed rest to Oleksandr Zinchenko.

Thomas Partey, who consolidated his status as a fans’ favorite following his impressive performances this season will likely be partnered in midfield with Emile Smith Rowe and captain Martin Odegaard.

In attack Saka is, again, likely to provide much of the entertainment and quality coming off either flanks while Nketiah, fresh off scoring two goals against ManchesterUnited, will likely start in this game as he will be needed. Trossard will likely get his first start for Arsenal in this game on the flanks with Saka while Nketiah leads the line.

Mikel Arteta provides an update on the injury of Gabriel Jesus