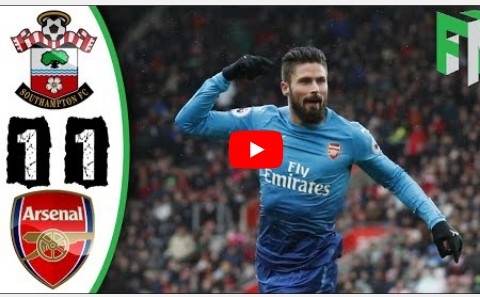 The gunners almost lost to Southampton today but were delighted with a goal that was scored by Olivier Giroud in the last minutes of the match.

The gunners were welcomed at the Emirates stadium today by the Saints who came into this match well knowing that they are facing a big club who they probably tamed in the first half of the match after scoring an early goal against Arsenal.

Olivier Giroud equalised for the gunners in the 88th minute with all the supporters who were eagerly waiting for a goal and some had even started leaving the Emirates stadium.

Olivier Giroud was not among the squad that started the match today but he was brought into the match after things weren’t looking good at the pitch so he came in and he luckily helped the gunners equalise later on as the match was going to end.

The gunners will now start urging Arsene Wenger to be starting the French international in most English Premier League matches because he has always been very influential in matches where he is given chance to play this season.